There is a chilly breeze outside, but the spring sun is already warming the walls of Jenna Bergström’s small production facilities. In the morning, Jenna took her daughters to daycare and returned home to make ice cream.

And that is precisely what she now gets to do daily for her job: to make ice cream.

“I feel really excited and even quite emotional about how positive the reception has been,” she sighs happily.

The ice cream factory girls are a trio. However, two of the youngest members spend their days at daycare while their mother works hard at the little factory. Jenna’s husband helped out a great deal by building the company’s production facilities in the shed in their back garden.

Now, the ice cream and pasteurisation machines ordered from Italy are churning away at ice cream mix made using Jenna’s own unique recipes. This passionate baker got her inspiration from the world of confectioneries. In addition to the traditional flavours, the ice cream machine is used to make blueberry pie, cookie crumble and lemon tart ice cream, for example.

“The very first flavour was blueberry pie. I fashioned it after my own trusty blueberry pie recipe, and it remains my favourite to this day,” Jenna reveals. 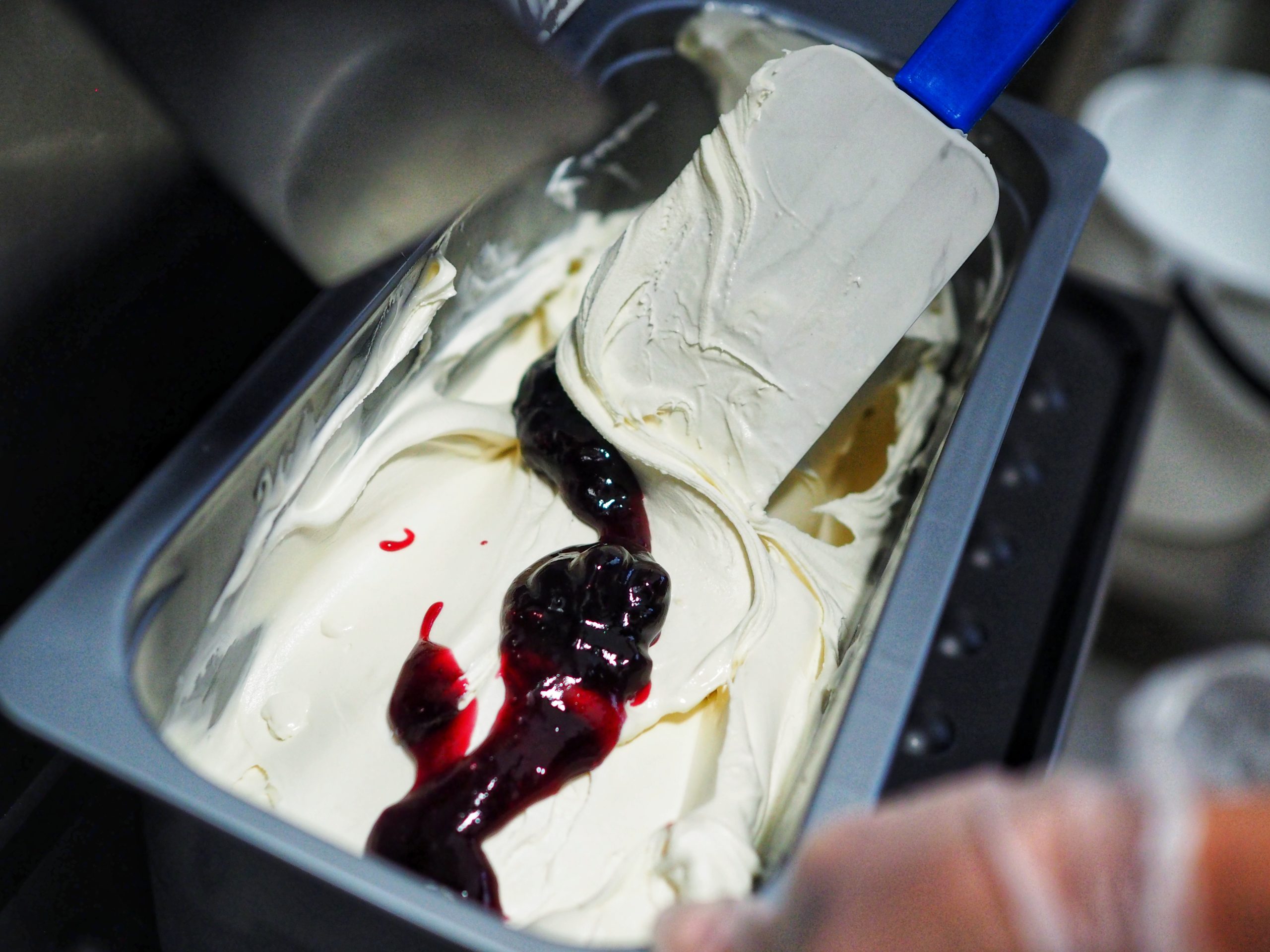 But how did Jenna Bergström end up founding her company Jäätelötehtaan tytöt? “It was my passion for good ice cream and the idea of combining the aspects of making my own products and meeting the customers in person,” she explains.

“I have a Bachelor’s degree in Hospitality Management and have worked in many different kinds of café and restaurant jobs. The idea of entrepreneurship, and perhaps my own café, is something that developed over time. Eventually, after different phases in life, I realised that ice cream was the thing that I wanted to do most.”

And she already had experience in ice cream-related work. In her previous café job in Turku, Jenna got to make Italian gelato, and as a young girl she worked at the ice cream kiosk of her family’s touring funfair for many summers.

“At some point, having been frustrated about something, I think I groaned to my husband that I was just going to make ice cream. And that’s pretty much all it took. My husband planned the production facilities in the shed we had in the garden, and the idea took off for real,” remembers Jenna, with a smile on her face.

The ice cream factory started operating in a more serious way in the Bergström’s Santtio home last October, although they were only able to start production after the turn of the year.

“We put so much work into our dream, and there are just so many things to investigate and deal with before you even get to make your first batch of ice cream. At the end of the year, we ordered ice cream machines from Italy, and now we’ve truly got things rolling on the production side of things,” says Jenna. 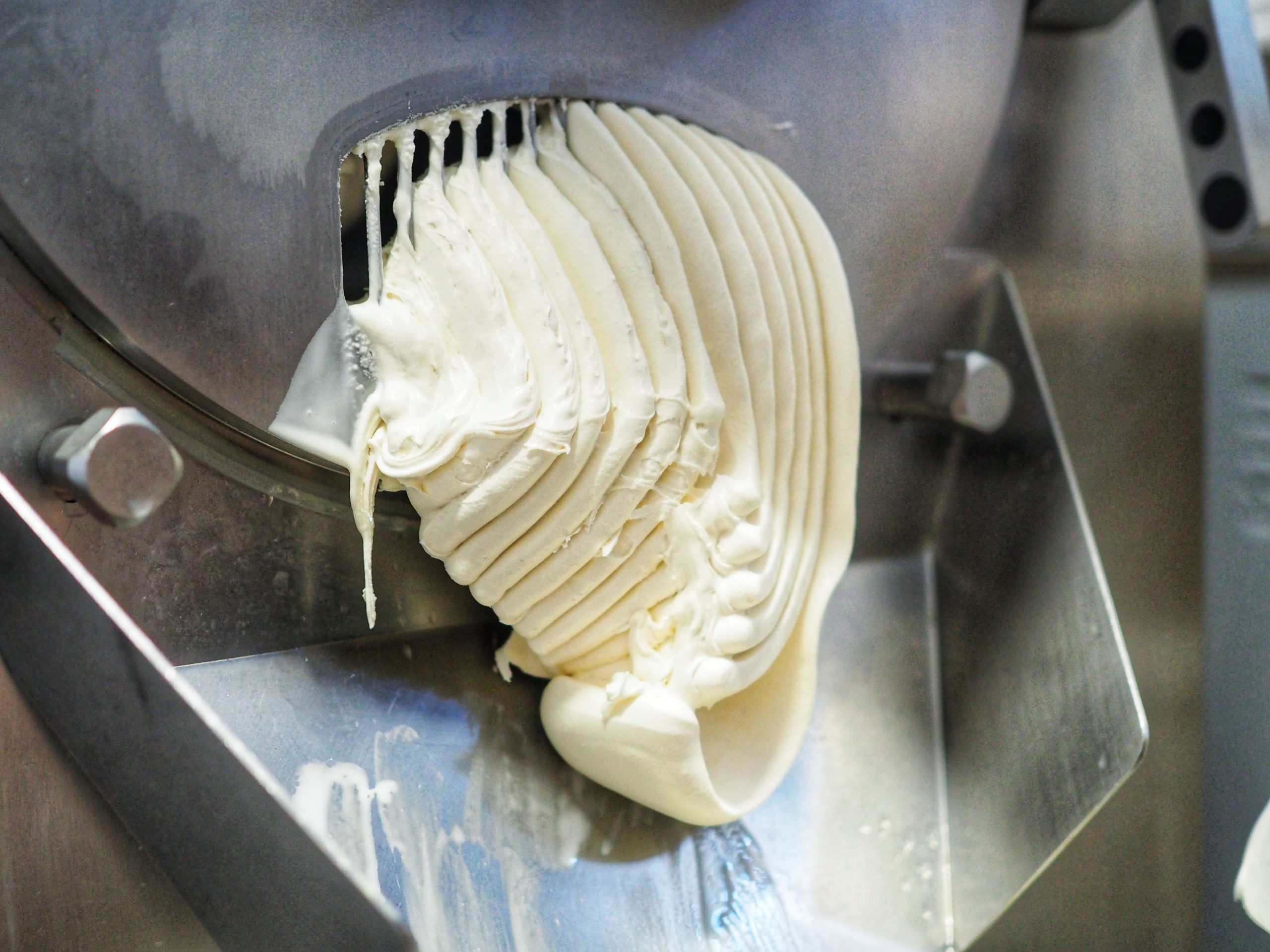 On Labour Day, Jenna Bergström sold her first ice cream portions from the charming little ice cream bike of Jäätelötehtaan tytöt on the market square. The ice cream bike is one of the cornerstones of her business concept. In the city centre, Jenna serves fresh, local ice cream from her bicycle throughout the spring and summer seasons.

The times when she sells are available on the company’s website and social media channels.

“In practice, the start of the week is focused on ice cream production and the end of the week on sales, at least initially. But we’ll see how things settle down,” Jenna says.

Currently, Jäätelötehtaan tytöt offers 15 unique ice cream flavours, with more in the pipeline. The ice cream artisan is especially waiting for the rhubarb season and the sweet local strawberries.

“I want to go for real, natural flavours and colours. The yoghurt and cherry ice cream turned out delicious, so maybe next I’ll try adding rhubarb compote to the yoghurt base,” she thinks.

Jenna Bergström hopes that her ice cream sells well enough for her to be able to offer a summer job to one of the young people in Uusikaupunki at some point.

“And I do have long-term aspirations when it comes to this topic, but I’m keeping them to myself for now. We’ll have to see where this takes us,” she says with a smile as she pours the next batch of yoghurt and cherry ice cream into her ice cream machine.

Jäätelötehtaan tytöt (only in Finnish)