Uusikaupunki has 31 playgrounds managed by the city. We teamed up with two practical experts—5-year-old Saga Myllymäki and 6-year-old Iisa Käyhkö—and visited three playgrounds to try them out.

Continue reading for their expert opinions on the different playgrounds! 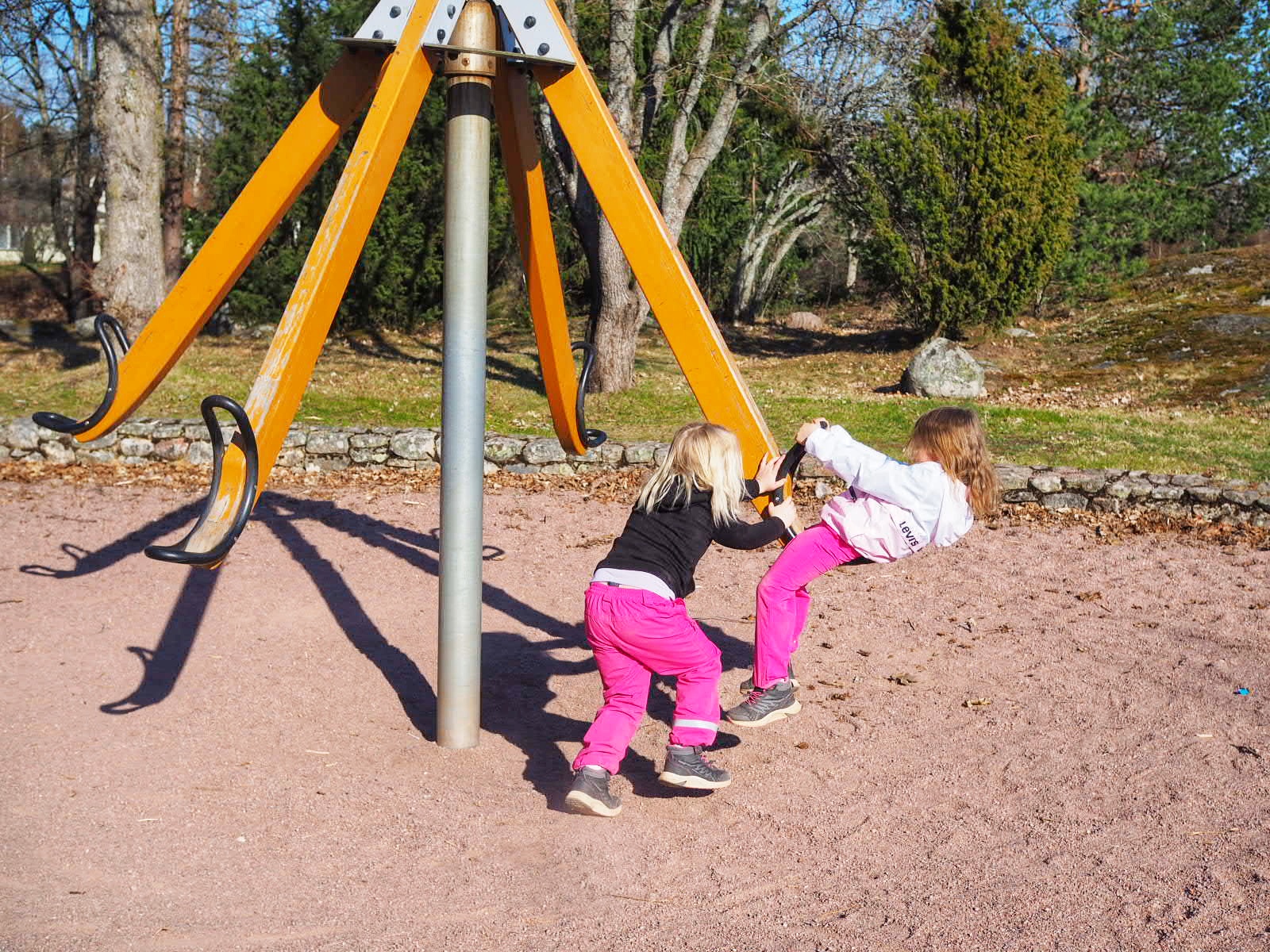 Saga and Iisa send the reddish gravel flying as they dash towards the play equipment. Saga runs first to the swings and Iisa tests her skills on the climbing frame.

The sisters take a dizzying ride on the small merry-go-round, and it seems like the traditional play equipment has lost none of its charm. The larger seesaw is so big that their feet don’t touch the ground, so the girls ask for mum’s help. Rocking the seesaw makes them both giggle.

“My favourite is the climbing frame with the slide,” Iisa says.

“My favourite is the swing. And the merry-go-round is nice, too,” Saga says.

After a short time playing, the sisters are ready to move on to the next playground. 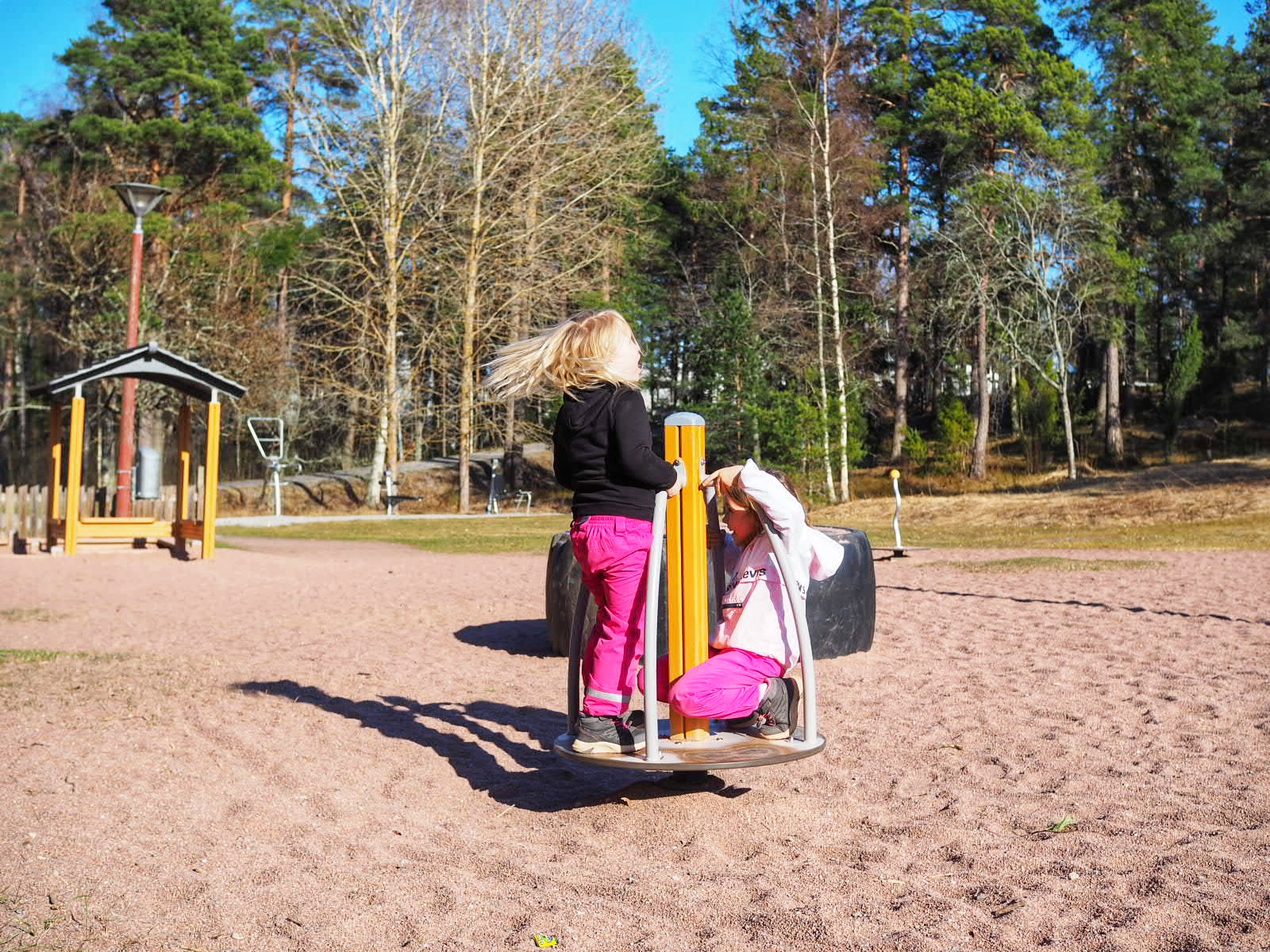 Before heading for the playground, Saga and Iisa test the outdoor gym equipment in Saarnisto park. However, they soon grow tired with push-ups and make for the play equipment.

Saga sprinkles sand on the small merry-go-round and gives it a big spin. The flying sand makes Saga laugh. Next, it’s time to take a ride.

“This spins so fast even when I only push it a little bit!” Saga screams, spinning on the merry-go-round.

The large tractor tyres half-buried in the ground are a hit – both children climb, jump and balance on them many times. Iisa wants to try wall climbing, but the wall is slightly too high for her.

“They should have these in my size. This is a bit too difficult,” she points out.

After testing the swings and the climbing frame, the playground jury has reached its decision.

“This is a fun playground. I like the tyre thing and the slide. And the little merry-go-round. I would add a tyre swing and seesaws,” Iisa says.

Saga has some development ideas for Saarnisto park.

“I found it a bit boring, but the merry-go-round was nice. They should have merry-go-rounds that spin on their own. And slides for smaller children. And trampolines!”

It’s time for the third and final playground. The girls affirm that they’re not too tired yet. 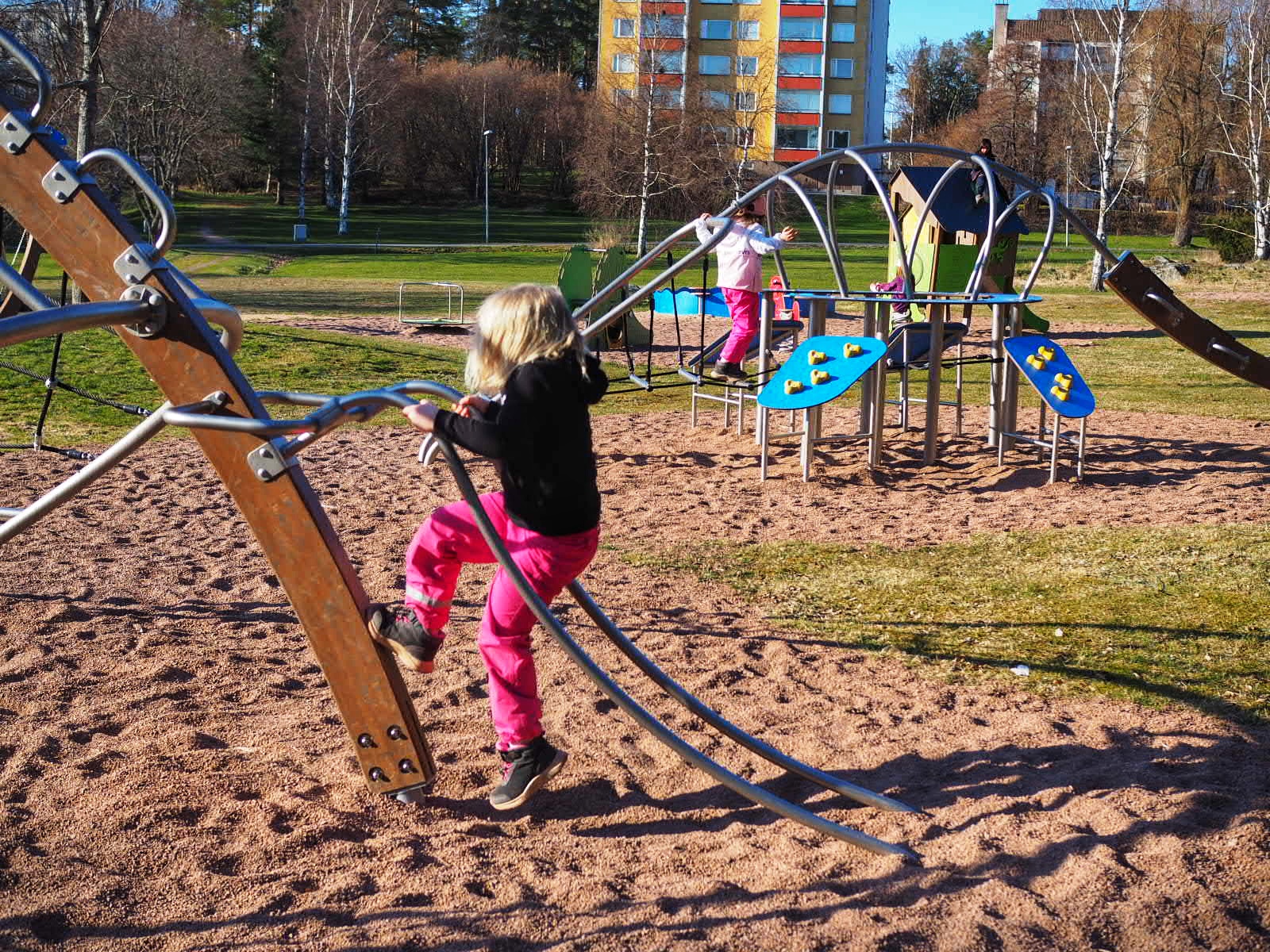 The Pietola playground was renewed recently with a dinosaur theme and the test team is immediately drawn to the climbing frames. There are climbing frames for different skill levels, and Saga and Iisa enjoy them all – climbing is so much fun!

Iisa finally finds what she’s been looking for in the dinosaur park: a spider web swing. She pushes the swing and jumps on to enjoy the ride while lying on her back.

“I could live here. Only the roof missing!” she says with a laugh.

Saga is moving on the dinosaur springer so fast that her blond hair is flying from side to side.

“This is a good park. The springer goes fast,” she says.

Which of the three playgrounds was the best?

After a couple of hours playing in the three parks, Saga and Iisa are ready to choose their favourites.

“They were all fun. But Saarnisto park was probably the best. It had the best equipment,” Iisa says.

“I liked the Myllymäki playground the best,” Saga says.

Visit the many playgrounds in Uusikaupunki and find your own favourite!