Graphic designer Hanna Laurikko and photographer Jari Laurikko are both visualists, and the beauty of the town by the coast had attracted them for years during occasional trips there.

A few years ago, just before the pandemic hit, they were touring Finland with a camper van. The couple’s lives were at a point where they could fulfil their dreams. Their children were adults and neither of them had a job that was bound to a specific location. Their home could be anywhere.

As a photographer, Jari was interested in Lapland and the light of the Arctic Circle. Hanna was excited about Lappeenranta and the views of Lake Saimaa. The matter remained open until they found an interesting opportunity in a surprising location: a rental apartment in Uusikaupunki was vacant.

“I was abroad visiting the family of our daughter, but Jari went to check out the place immediately after seeing the ad.

The idyllic guest harbour and wood house districts of Uusikaupunki were already familiar to them from previous sailing and car trips in the summer, and from the 2000s, when they lived in an old school in Laitila, right next to Uusikaupunki. 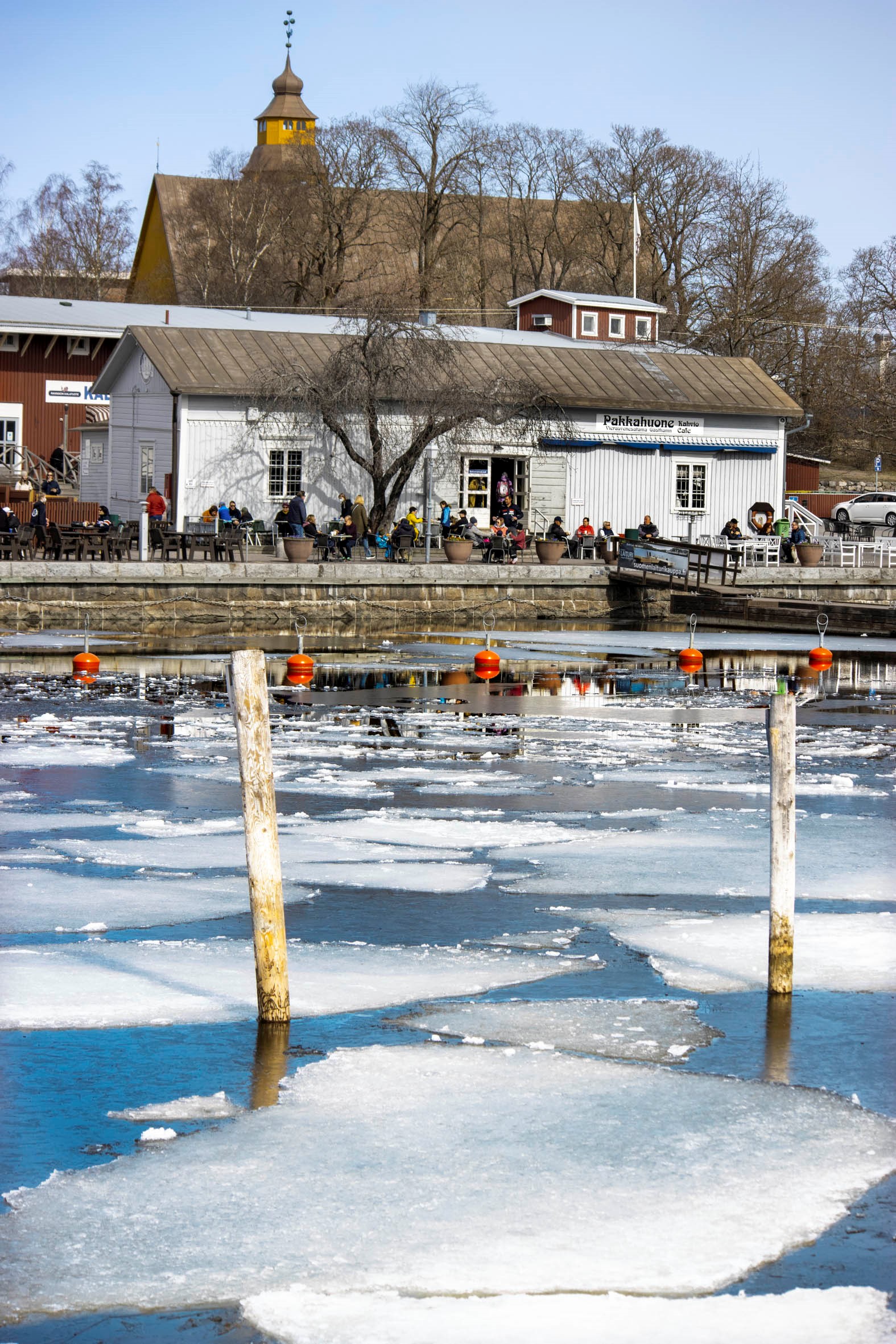 As visitors, they noticed that the town had a unique atmosphere. They think that Uusikaupunki emanates the seaside town’s international history in a unique way. The town on the coast of Bothnian Sea is not just any other place, but a town with a history of more than 400 years where you can see the handprint of past generations in the wooden houses of the town centre.

They have now lived in the town for just over a year and found new aspects in it as permanent residents. The couple are particularly delighted that the old town not only values history, but also looks forward to the future. They say that the slow-paced walking street established in the town centre last year is an example of this. Alinenkatu, a street that runs along the city centre, underwent a major transformation last year. Now, events can be arranged on the streets and the Laurikkos believe that the arrangement increases the attractiveness of the brick-and-mortar stores along the street. 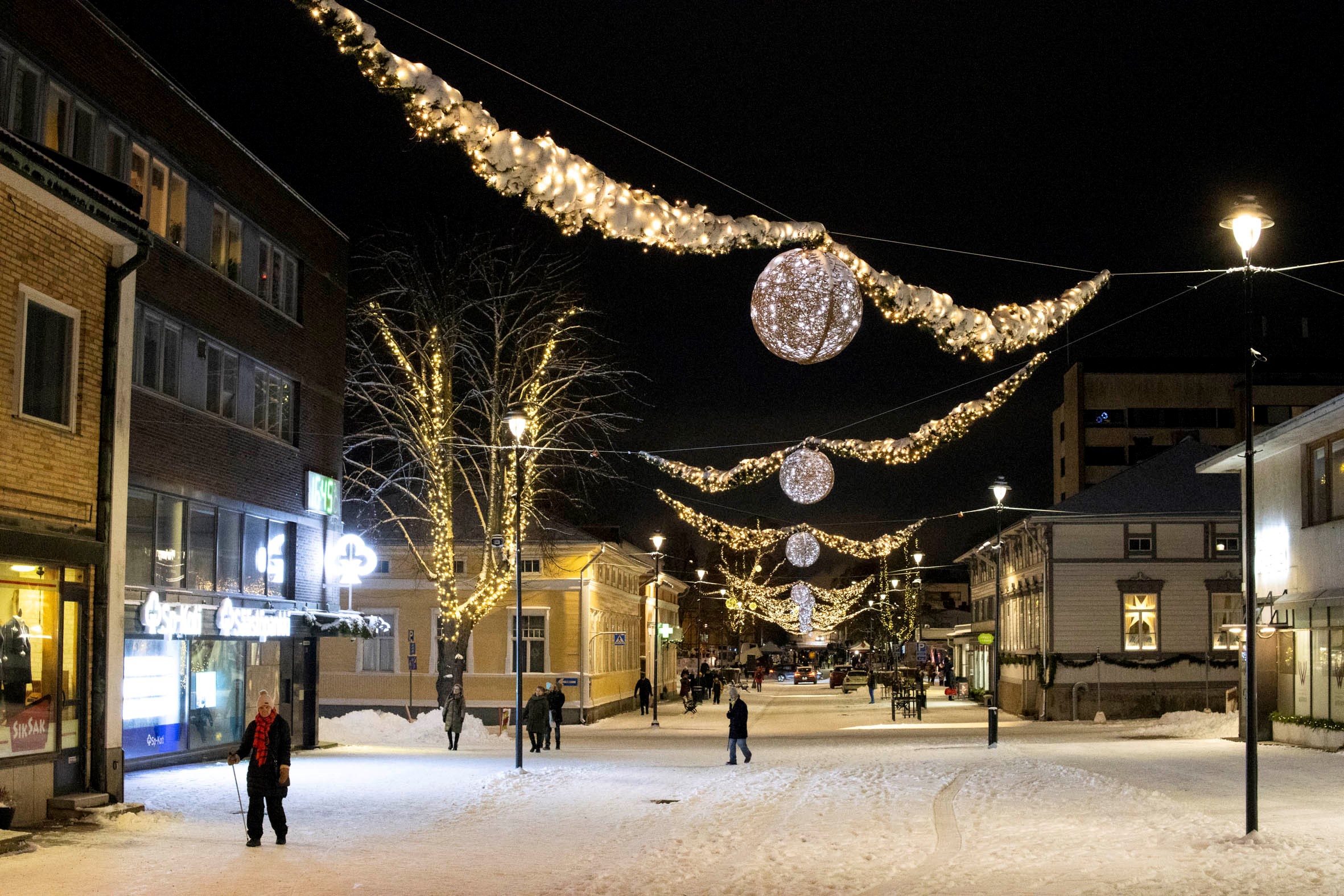 The couple particularly enjoyed the atmosphere of the new street during Christmastime, when the already spectacular Christmas lights of the town were extended to the street lined with boutiques. Alinenkatu has become particularly close to them as the couple found a perfect workspace for both of them along the street. The same district houses the couple’s latest home, already their second in Uusikaupunki. It only takes a few minutes to walk to the workspace.

“It is such a short trip that I usually take a moment to walk around the Kaupunginlahti area in the morning before I start working”, says Hanna with a laugh.

The couple thinks that the Kaupunginlahti area is one of the crown jewels of Uusikaupunki town centre. The spectacularly illuminated coastal boulevard provides pedestrians with an atmospheric setting.

The restaurants of the idyllic beachside warehouses bring life to the town in every season.

“The area has a continental atmosphere even in the winter.” The couple say that the new glazed terrace of the Bistro Bay restaurant along the Kaupunginlahti shoreline is magnificent and they praise the enthusiasm of local entrepreneurs. 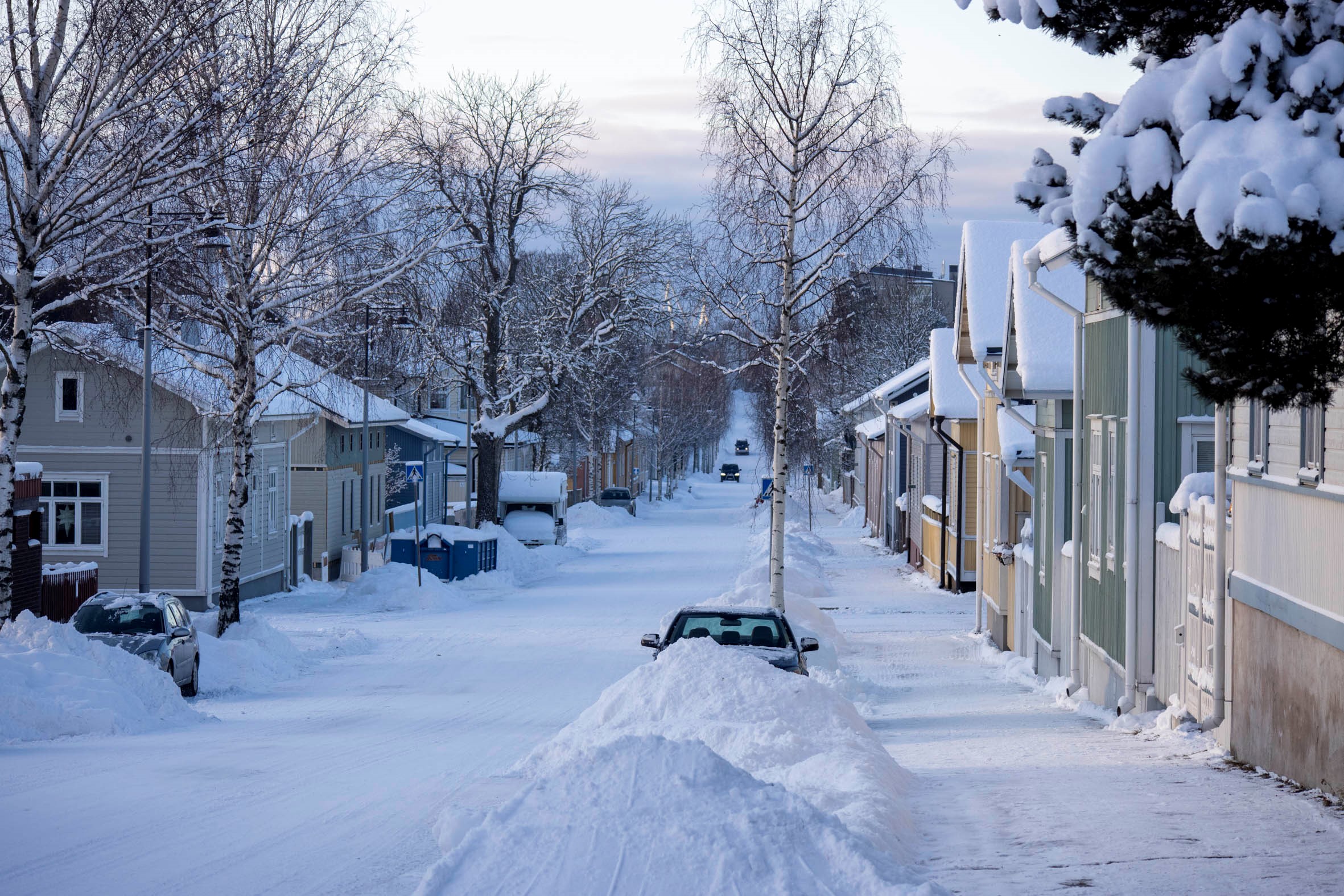 Hanna describes the town as cosy, while Jari thinks that the basic services are organised well. “It is easy to book an appointment online for basic health care services, such as COVID-19 vaccination. And if the pharmacy does not have a specific medication available, they will recommend to get it from a pharmacy in another town. This cooperation between entrepreneurs makes the daily lives of the town residents easier,” he says, explaining how the services of a small town work at their best.

The family has now sold their camper van and sailing boat, but they have found a new home port. There are plenty of interesting places for explorers to visit in Uusikaupunki every day of the year.

The uncomplicated life of a small town manages to surprise them time after time.

“One morning, I noticed that we had no bread. In just twenty minutes, I had checked the selection available in two stores and a bakery,” says Jari.

The couple is tied to the town not only because it is their home, but also through the nice atmosphere of the small town. Last summer, they were pleasantly surprised when they received an invitation to visit a couple they were previously unfamiliar with. The couple visited the Laurikkos’ exhibition at Cultural Centre Cruselli early in the summer. Another positive aspect of the town is that everything is close by and there is no need to sit in traffic.

Hanna, who used to work as a graphic designer all her life, is now working part-time at the local newspaper Vakka-Suomen Sanomat. Last year, she also graduated as a tailor. She spends part of her week at the Ateljee Nystad studio owned by her and her spouse, who is a photographer.

The couple have recorded their new neighbourhood and local scenery in posters and postcards. They have held exhibitions in Uusikaupunki, Taivassalo and Vehmaa. An online shop is also on the way. 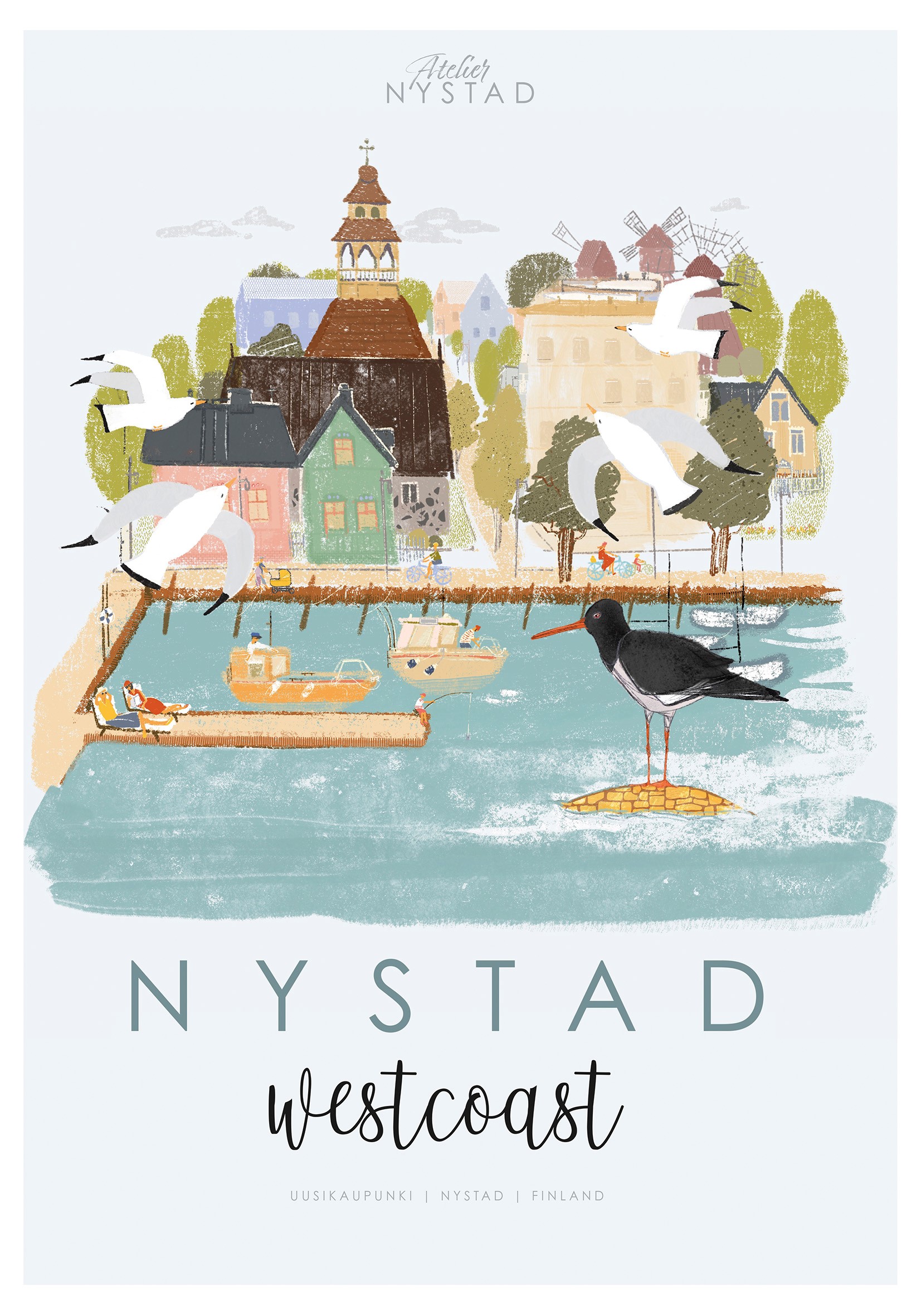 The couple think that the location of Uusikaupunki is ideal for them as they like to travel a lot. Visiting their grandchildren is easy via Tampere-Pirkkala airport.

“The advantage of a small airport is that it only takes a moment before boarding the plane and being on your way,” Jari says.

They both wish that passenger traffic on the tracks between Uusikaupunki and Turku would continue in the near future.

“A commuter train service to Turku would give Uusikaupunki even more potential. The town’s public transport experiment was very welcome and we hope that it will become a permanent service at some point,” says Hanna.

Last—but not least—they think that the town’s extensive selection of high-quality playgrounds is a definite advantage of their new home town. As the grandparents of two small girls, they value the investments made for children.

Last midsummer, the Laurikkos decided to visit and test all of the playgrounds with their grandchildren.

“They were so enjoyable that we spent hours in them and we didn’t have the time to visit all of them even over several days.”

The playground at the market square in the heart of the town earns special praise from the grandparents. “Where else in Finland can you find such a magnificent playground at the town square! Families with children have something special here,” they say. 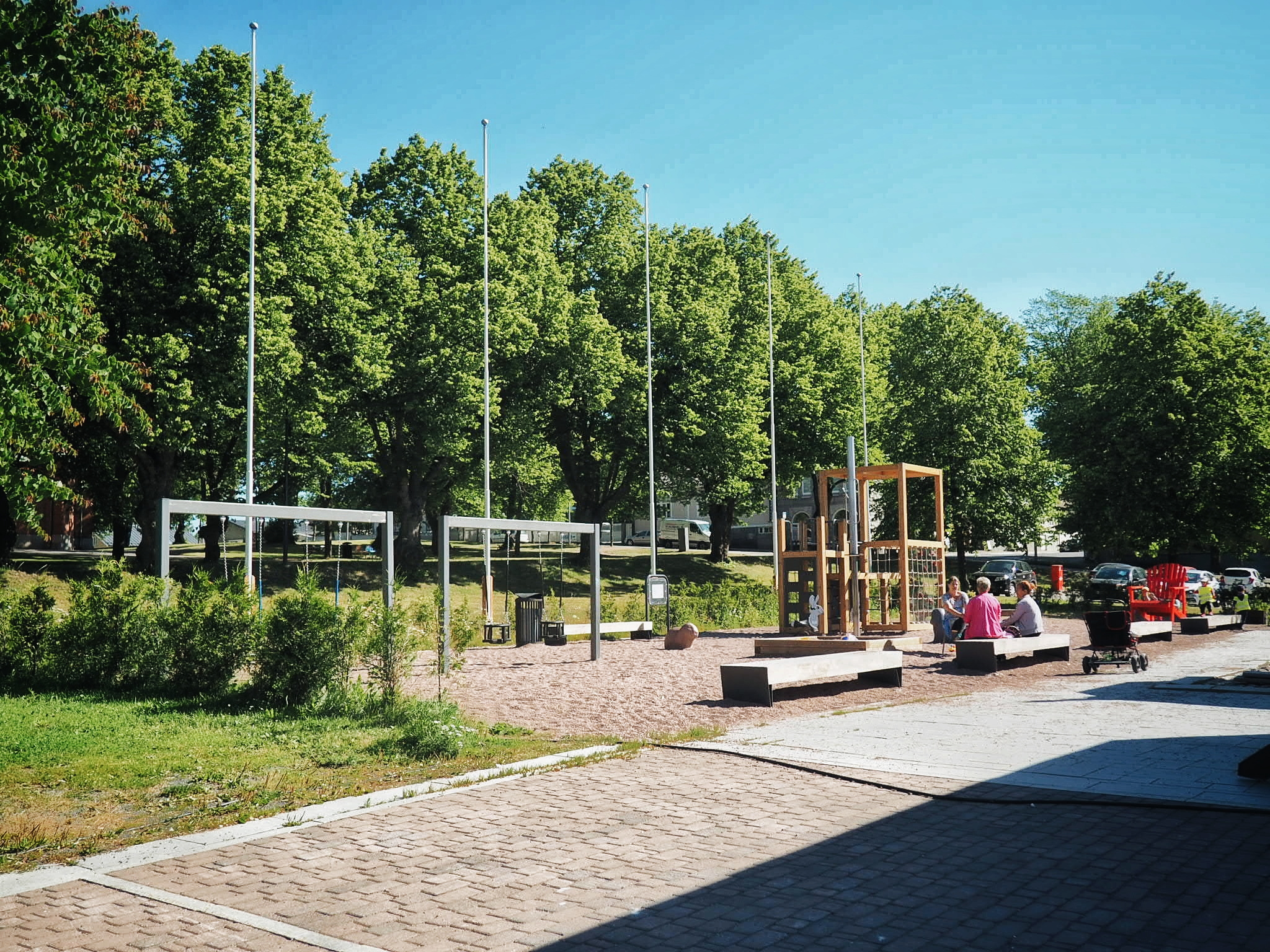 The new residents of Uusikaupunki also want to highlight the town centre’s guest harbour and its idyllic café’s tasty doughnuts—perhaps the best in the world. You can trust Jari, as he is specialised in testing the doughnuts of different cafés.

Life is good when spring is around the corner and you can gaze at the boats floating by on the Pakkahuone terrace. While enjoying a freshly baked doughnut, of course.

The street views and landscapes of Uusikaupunki used as illustration in this article are photographs of Jari Laurikko and the poster is designed by Hanna Laurikko.