Katariina Torvinen’s question had the heads of her colleagues turning, but she was herself a bit surprised, too.

What did I just say? Her question posed in the dialect of Southwest Finland, with the proper inflection to boot, was a sign of the fact that the Lapland girl had now truly found a new permanent home in Uusikaupunki.

Homey is the right word to describe the feeling that Katariina now has when thinking about her new home municipality. But nothing will make her drop the Lapland pronouns “mie” and “sie”, as her childhood dialect is part of her personality. However, she is happy she can understand Uusikaupunki residents and the Southwest Finland dialect without a problem. 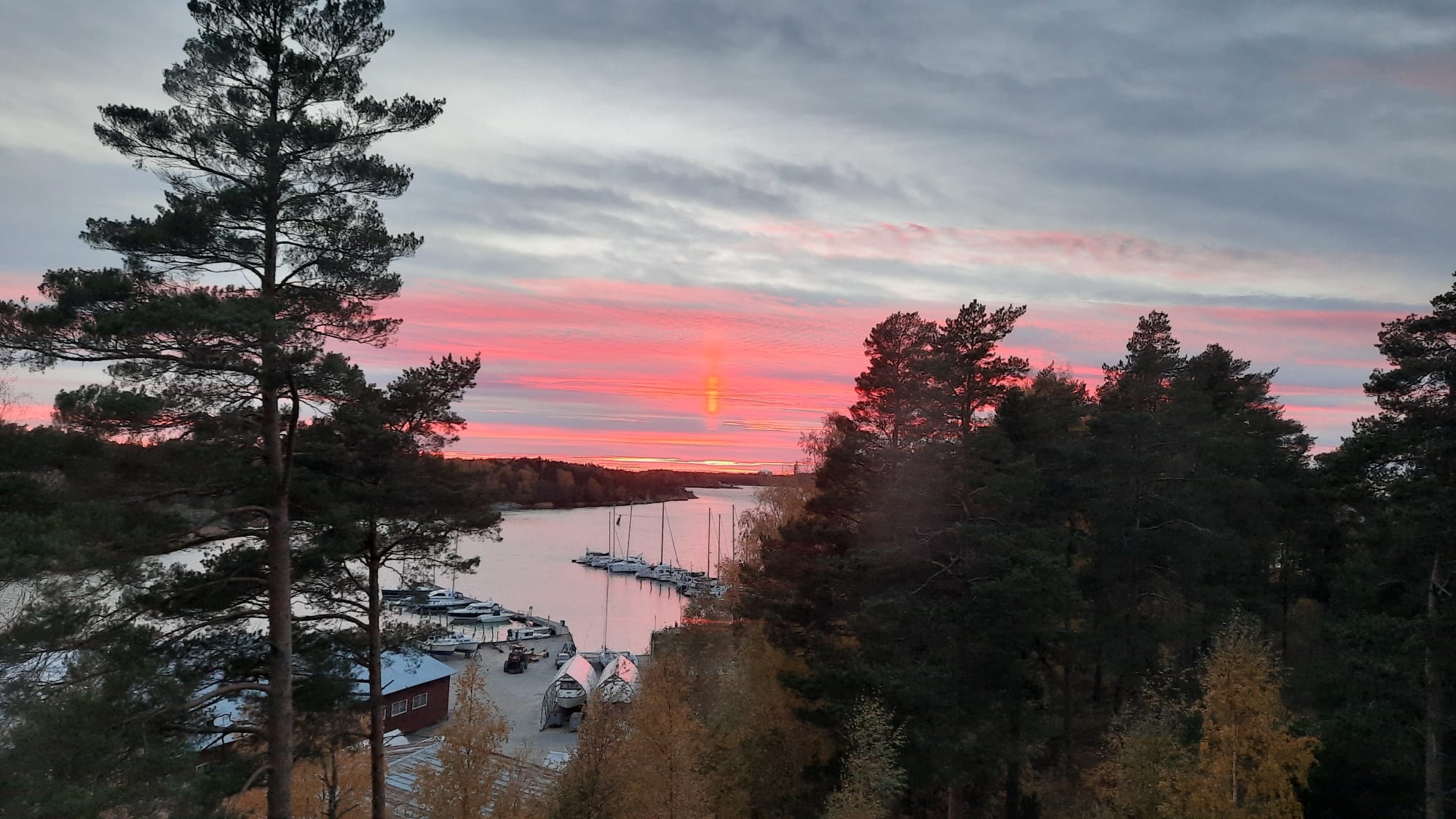 Katariina spent her childhood and adolescence in Lapland, and her journey from Tornio to Uusikaupunki had multiple turns along the way. Her first encounter with Uusikaupunki was through her workplace, and she has now spent two years as a resident here.

She has her friend to thank for finding her current home. She made the decision to move as soon as she saw the available apartment.

Located near the centre of Uusikaupunki in Sorvakko, the balcony of her comfortable flat has stunning vistas over the marina and the sea. The feeling of having found just the right home for her was strong already on her first visit, and her infatuation has now turned into love for the entire city.

“I feel so at home here. I don’t want to go anywhere else. I come from a small town, and Uusikaupunki is just the right size for me.

Here, not only do we have peace and quiet and nature but also all the services you could ask for,” she says, stopping to think if there was anything she has needed to go buy outside Uusikaupunki.

“Nope, there isn’t anything I needed to go buy outside Uusikaupunki,” she confirms.

Some twenty years ago, the woman from Lapland moved to Soutwest Finland with her then partner. Katariina, who had an engineer’s qualifications, worked in industry and as a business management consultant before moving onto project work and business consulting at Ukipolis. Owned by the Vakka-Suomi municipalities, Ukipolis is a development organisation serving companies in the region.

“I went there for a year but ended up staying for ten,” she says with a laugh.

Four years ago, she went to the Soutwest Finland municipality of Pöytyä to become a director of economic development but returned to Ukipolis two years ago to become its managing director. Her work takes up a lot her time, but as an active person, she also likes spending time on her hobbies.

Katariina finds that her new hometown has a truly breathtaking number of hobby opportunities, with new ones constantly popping up. As a grandmother of two, she has noticed that there has been a great deal of consideration for families: there are skateparks, a pumptrack, a padel court and a disc golf course. 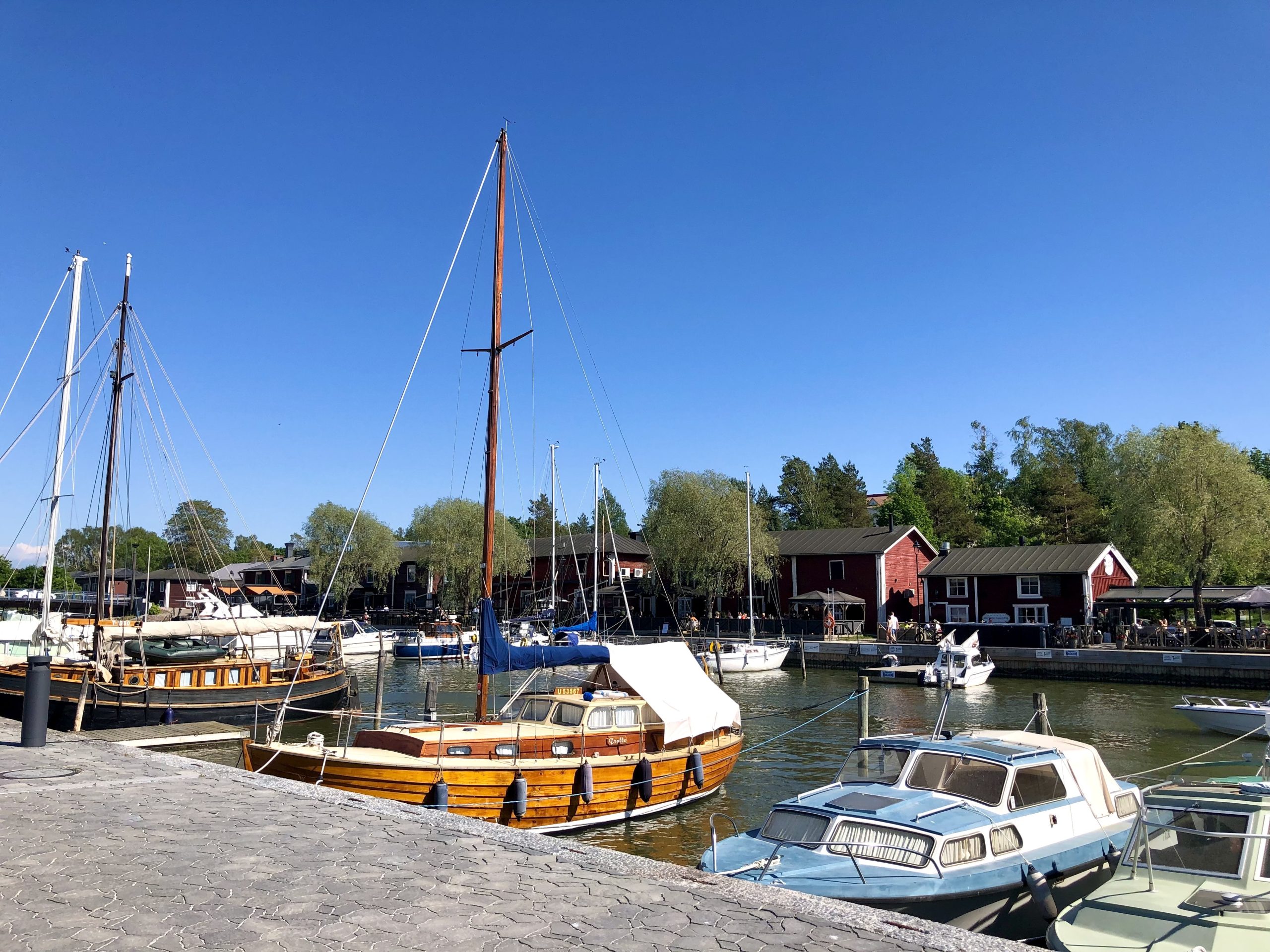 In her free time, Katariina takes to the road on her motorbike or walks by the sea in Kaupunginlahti and around the idyllic wood house districts.

Her friend Pirjo, who lives on the same floor and also told her about the flat, knows a lot about the history of the town and its buildings. The roots and stories of the town with a history spanning over 400 years are something that Katariina is interested in, and she is eager to learn more about the colourful past of Uusikaupunki.

Katariina is a stage actress who likes both performing and watching plays. However, recently, acting is something she has not done quite as much as before. In addition to the Uusikaupunki Theatre, she also goes to see the plays showing in the nearby cities, such as Turku, Rauma and Pori.

Katariina has been pleasantly surprised by the fact that Uusikaupunki is an active visual arts hub. There are lots of galleries and exhibition rooms, and there is always something exciting to see. She mentions Runonkulman Galleria and Galleria-Taidelainaamo Horisontti as examples. Cultural Centre Cruselli is located only a stone’s throw away from Katariina’s home. 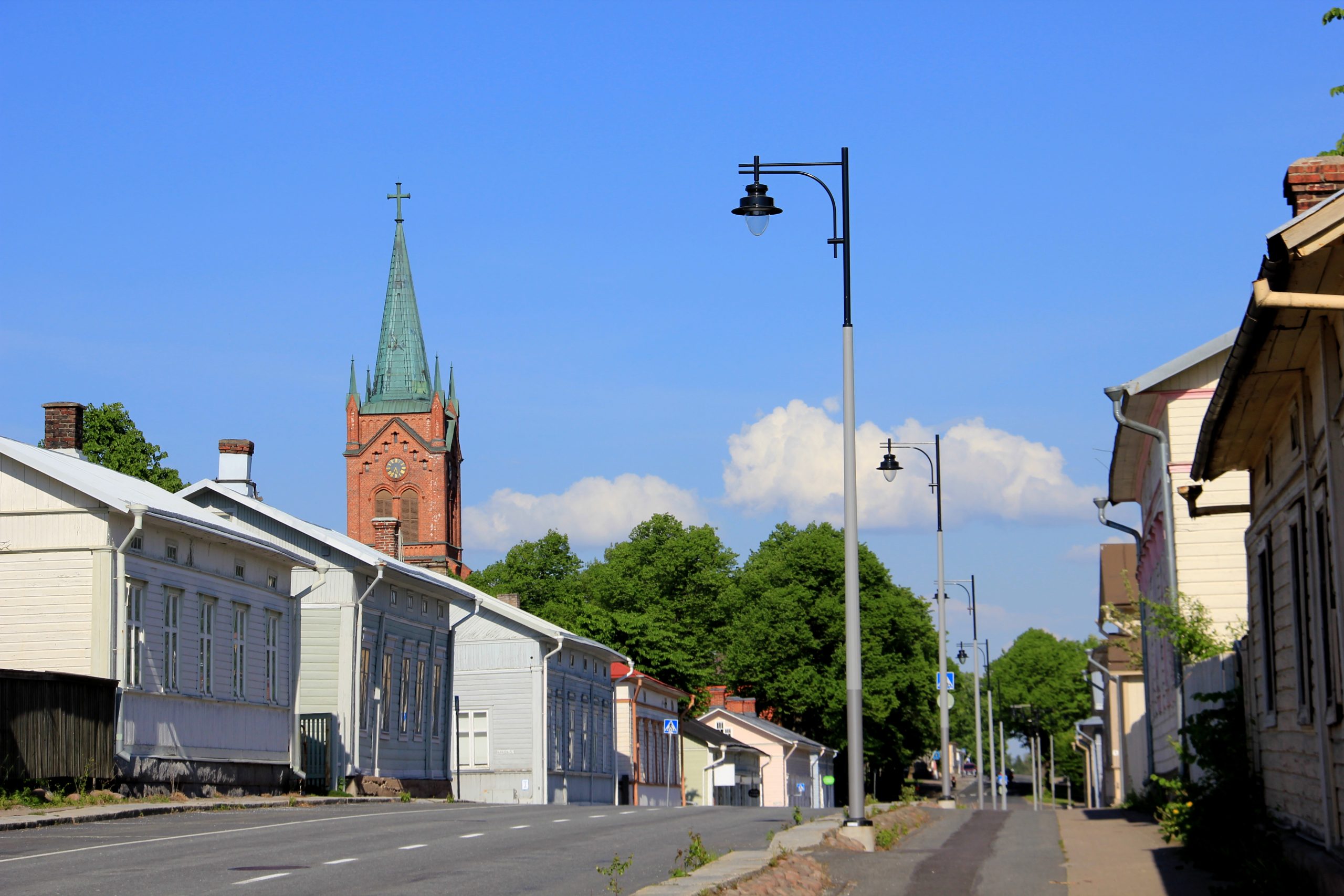 As her new hobby, Katariina has taken up clay sculpting. On a course organised by Pikkukylän Puoti, she had more laughs than she had had in a long time.

“I first thought I’d sculpt a tree from the clay, but the further I got, it started to look more and more like a bear. Out of nowhere, a trunk appeared, and it turned into an elephant. To top it off, a butterfly also appeared on the trunk,” says Katariina as she presents her wild artistic creation. 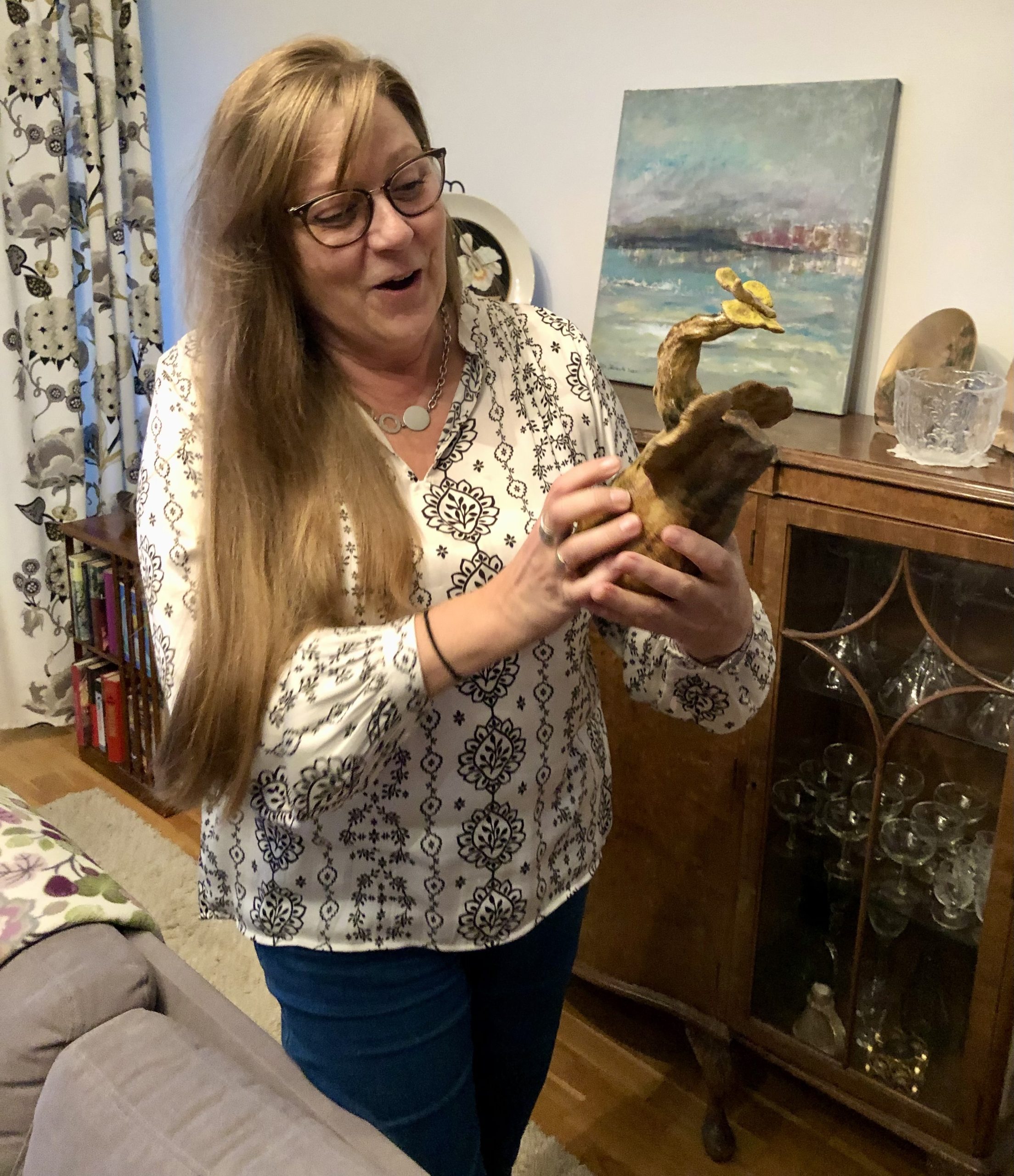 The shores of the Bothnian Bay have now been permanently replaced with the environments of the Bothnian Sea National Park. Some years ago, Katariina thought about returning to Tornio, after thinking that it would be a good option considering her aging parents. She then realised how dear her new hometown and municipality had become.

“I discussed my plans to move with my father, who was surprised. He got me to realise that my life was now in Uusikaupunki and that I was better for it,” said Katariina. 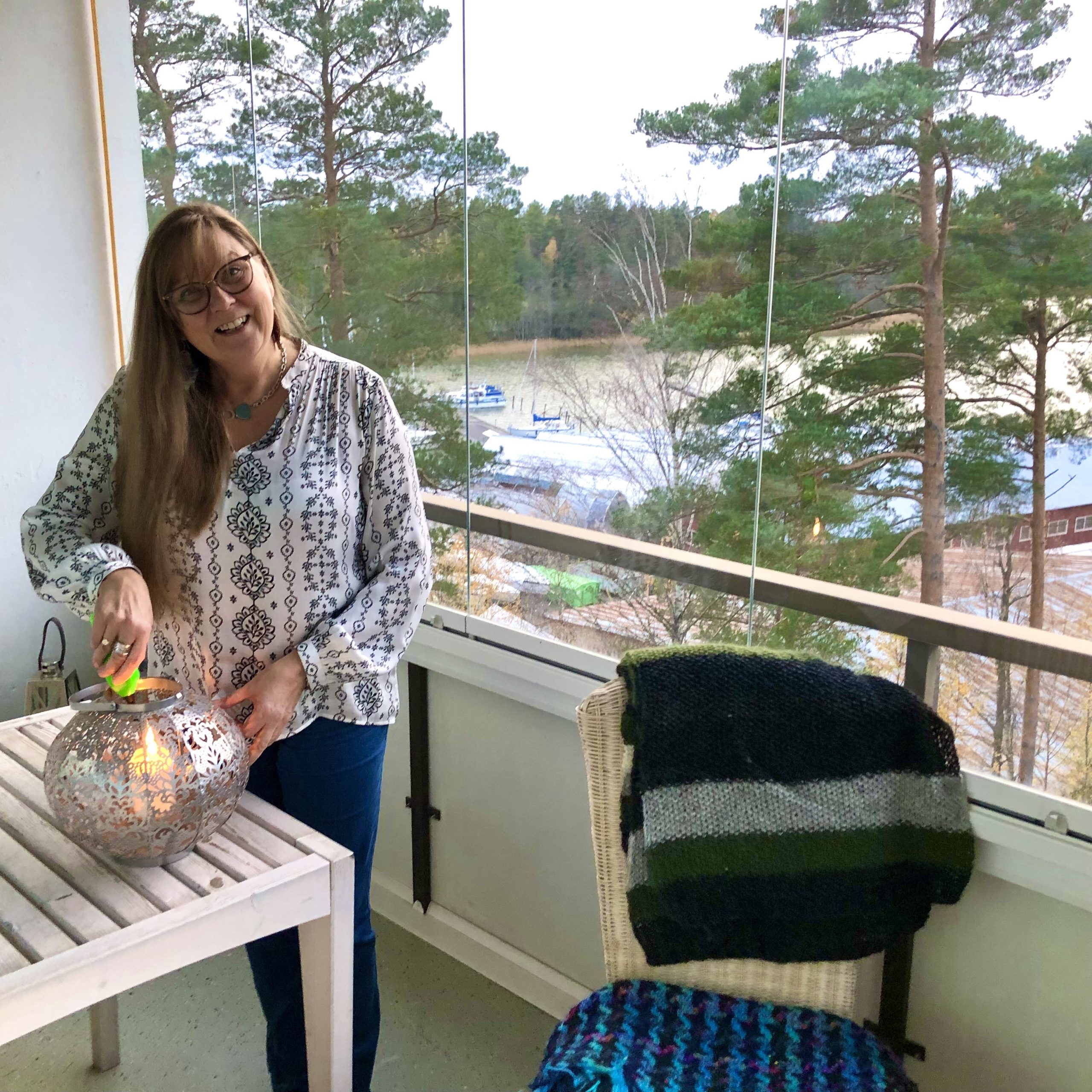 Autumn is the best time for mushroom hunting in the forests of Southwest Finland. Chantarelles, trumpet chanterelles and black trumpets were something she had not seen before since they do not grow in Lapland. She has also sent mushrooms for her relatives up north to enjoy.

“I pack the mushrooms in a suitcase, and a bus takes them to Tornio. My father then picks them up at the station,” she explains.

The mild winters initially felt strange to her, but she has already grown accustomed to them. The last few winters have been cold, and there has been plenty of snow in Uusikaupunki, which has allowed Katariina to go ice walking.

“I take some hot chocolate with me and enjoy the winter. The feeling of snow crackling under my feet takes me back to the Tornio of my childhood,” says Katariina.

Peace and quiet in Pyhämaa