Sometimes, great friendships are born in the most unexpected of places. This was certainly the case roughly ten years ago in the tiny lobby of the Myllymäki day-care centre, where two dads kept bumping into each other on most weekdays. The pair were united by their daily battle against time.

“When the door of the day-care centre closed at five, the two of us would often bump into each other a couple of minutes late at the so-called ‘door of shame’, that is, the backdoor leading to the non-standard hour child care section. The other common denominator was our gradually greying hair,” says Ville Laaksonen, grinning from ear to ear.

The soul brotherhood of these last-minute men, Ville Laaksonen and Juha Sappinen, was sealed when their kids became friends. The dads would take their boys to play dates and got to know each other. Another common denominator was that both men had moved to Uusikaupunki fairly recently.

At some point, the conversation turned to their love of playing music. In his youth, Juha had played the drums, while Ville played the bass. The rhythm duo had their first jam session in Ville’s garage. 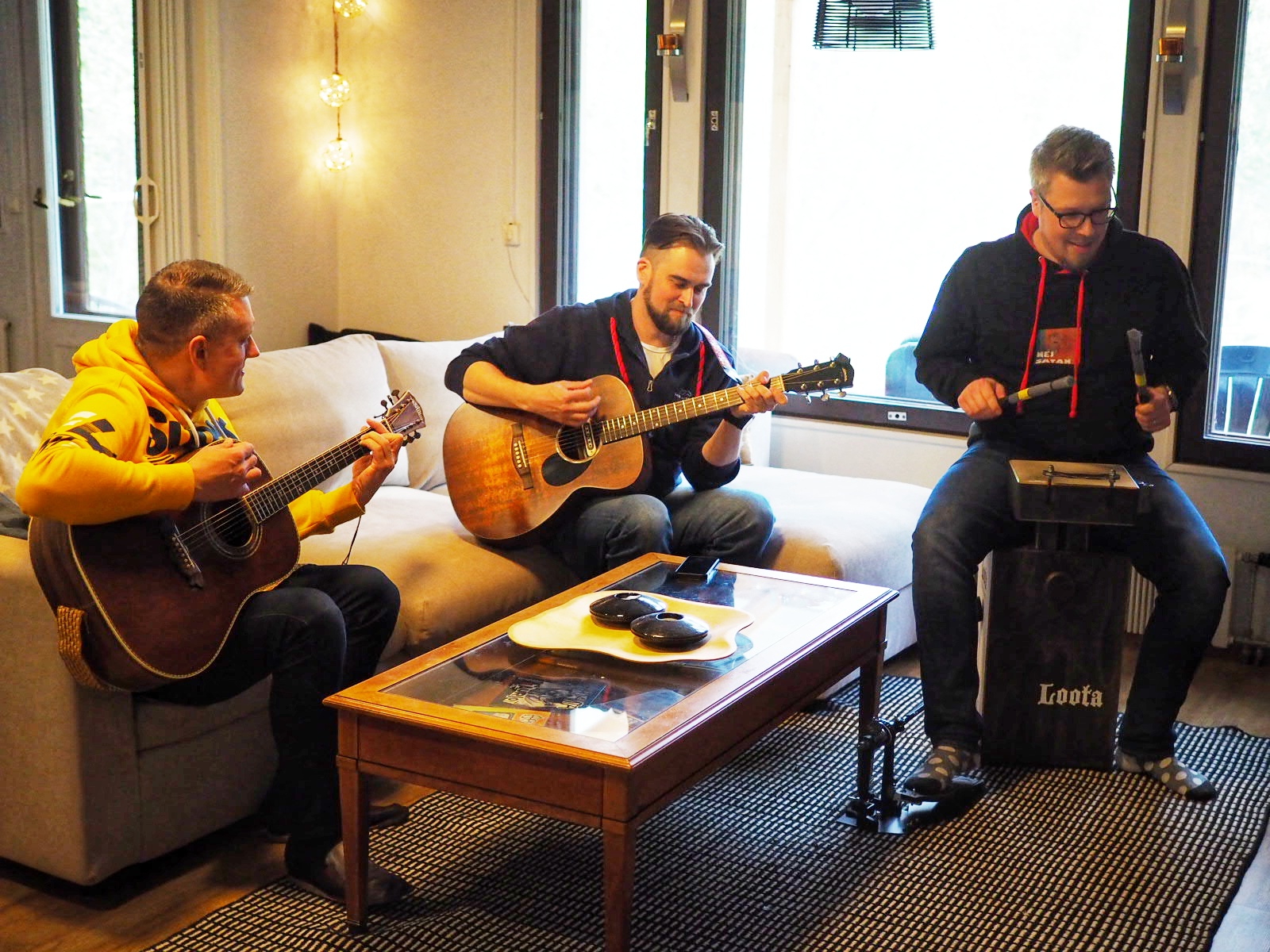 “I still recall that it was insanely cold and we desperately tried to warm up the garage with a tiny indoor car heater,” says Ville.

“Before that, though, we had a planning session in the sauna where, in a fit of incredible self-confidence, we listed the songs we’d be great at, and a few that needed a bit more work,” says Juha with a chuckle.

Even though it was good fun to play over recordings playing in the background – and although they sounded good – the duo wanted one or two more like-minded people to join them. Several musicians visited Ville’s garage to jam with them, but the band wasn’t complete until a couple of years later when Sami Kunvik joined as singer and lead guitarist.

“The key thing was to find a good guy with a similar dad attitude,” says Ville.

“And the thing is, Sami’s the real musician among us,” adds Juha.

By “dad attitude”, the men refer to a state of mind where a man believes in himself but is nevertheless fairly certain it will all go wrong. And so, a laid-back, accommodating and fun attitude is the band’s trade mark. The members of Kädettömät isät refuse to take themselves – or life – too seriously. 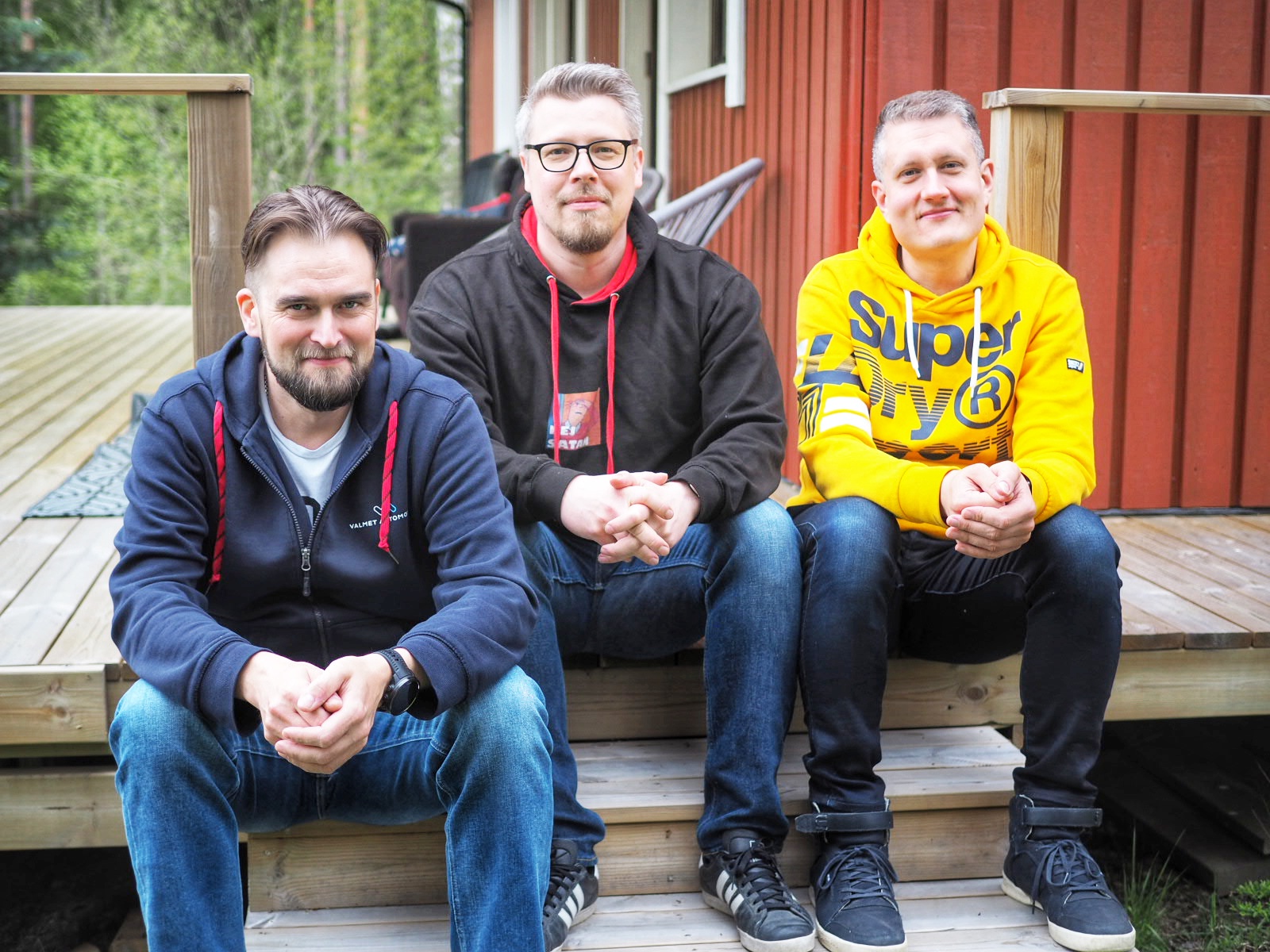 The band’s set list includes pop classics, Finnish pop tunes and rap. What they play at any give time depends largely on their mood.

“I guess I’m the most melancholy person of us,” says Sami.

“That’s right, Sami’s the one who comes up with the really emotional tunes. Sappinen and I, we tend to be more tongue-in-cheek with our song choices,” says Ville.

Even though the three men mainly get together over music, their friendship has more depth to it. For Juha and Ville, who had relocated to Uusikaupunki, the band gave them their first real friends in a new place. They talk about daily life but also deeper issues.

Each band practice starts over a cup of coffee, chatting about the latest news.

“This is sort of a therapy group for dads,” says Sami.

“Every now and again, the only time we touch our instruments is when the boys carry them in and then out at the end of the evening. You wouldn’t believe the joys and sorrows we’ve shared between the three of us,” says Ville.

Even though Sami is the only one born and bred in Uusikaupunki, with Ville and Juha being ‘outsiders’, the trio see their band strictly as a local band. They play gigs exclusively at restaurants and private functions in Uusikaupunki.

“OK, a couple of times we may have played in Laitila,” admits Juha.

Right now, the men are waiting for the COVID-19 restrictions to be lifted so that they can make their return to the summer terraces. In addition to music, the three dads promise to entertain the crowds with their lively banter.

“Somebody once joked that we can’t play, but we’ll make you laugh. That’s what we’re aiming for this summer, too,” says Ville.