It’s a typical spring evening in Finland. The last rays of sun shine through the kitchen window. Leena Viitanen picks up a piece of knitting from her knitting bag and knits a couple of stitches, almost like on autopilot, before starting to make coffee for her visitors.

“Is that the Maire dress? It’s going to be so lovely!” says Mervi Pyykkönen, who is sitting on the other side of the table knitting a beanie.

The two ladies start reminiscing about the dress pattern: where it was originally found, who wore it on social media, which yarn was used and the colours. It is obvious that these two are knittomaniacs. 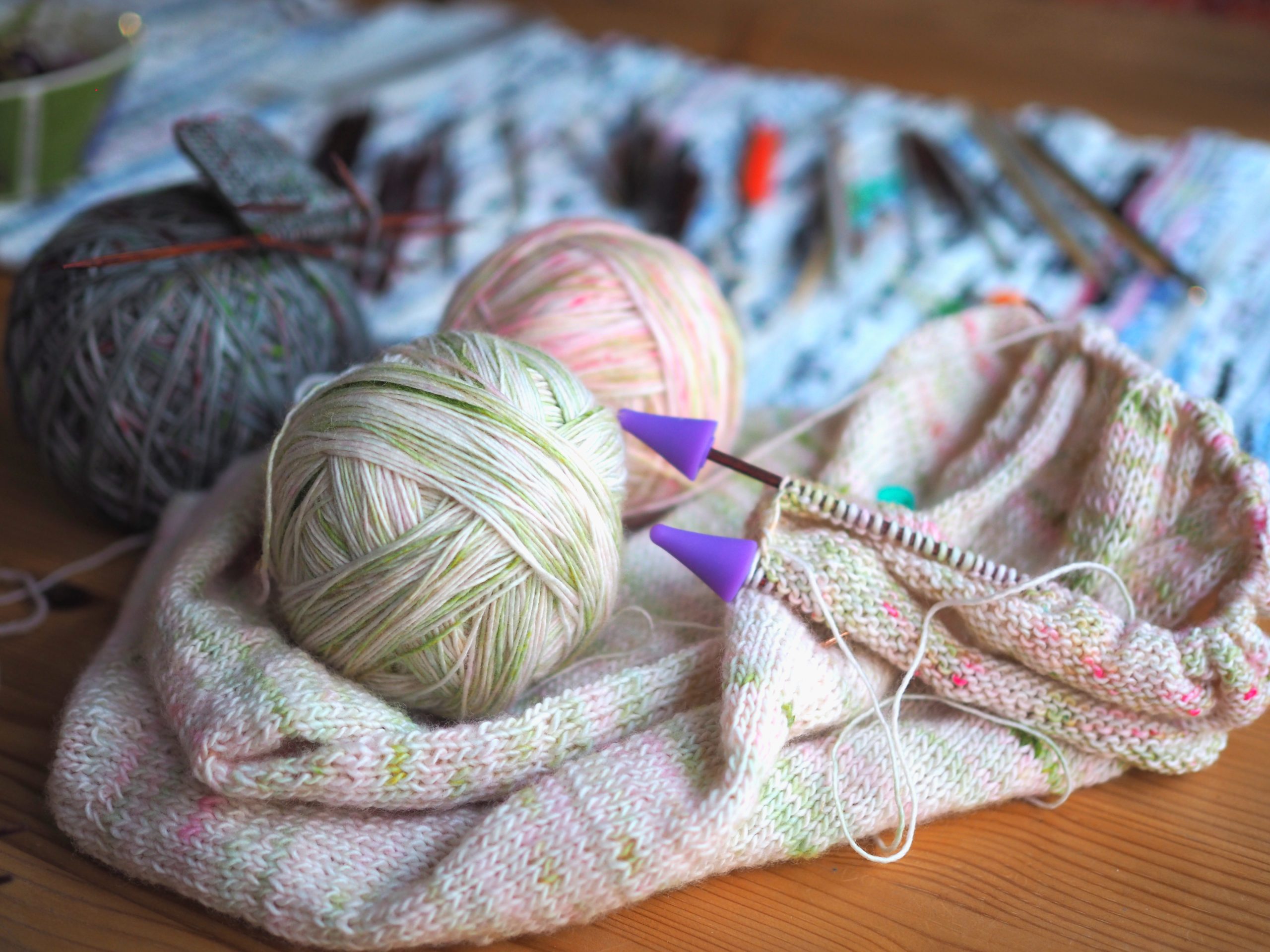 It could be said that Leena and Mervi both have handicrafts in their DNA. Leena remembers the very first time she experienced knitting: her mother and three older sisters were knitting, and they gave little Leena a pair of toothpicks and a ball of yarn.

“Ever since then, I’ve loved handicrafts,” she says.

Both of them took extra courses in handicrafts at school. Mervi remembers the first pair of socks she knit at school.

“I got the highest grade for them. That positive feedback probably encouraged me further with this hobby,” she says.

Even though they have always loved knitting, their hobby has risen to a new level over the past few years. A couple of years ago, Leena took a sweater knitting course at the Vakka-Suomi Adult Education Centre.

Once she saw her very first sweater completed, there was no going back.

“I used to knit on an occasional basis – now, it’s pretty much an obsession. I knit whenever I can,” she admits.

For Mervi, knittomania took over when the world stopped due to the coronavirus pandemic. Incidentally enough, the decisive piece of work for her, too, was a sweater.

“I noticed a joint knitting event on Instagram and thought that I might as well try it out, since it seemed to have lots of participants. Then, all of a sudden, I realised that I had completed an entire sweater. From there, my enthusiasm really took off,” Mervi says with a laugh.

Leena was particularly attracted by the diverse handicrafts courses offered at the Vakka-Suomi Adult Education Centre, whereas Mervi found her greatest inspiration on social media. Instagram has all kinds of knitters, as well as ideas, patterns, yarns and colours, and the knitting podcasts on YouTube provide more detailed approaches and instructions.

“The knitting scene has expanded rapidly over the past few years. If I relied solely on books and magazines for patterns, I would probably knit less, but now that you can find video tutorials for practically anything, even the trickiest problems are easy to solve,” Mervi notes.

Mervi and Leena have also discovered a wonderful world of materials and tools through online communities. They both acknowledge that tools matter when knitting. Finding knitting needles that fit in your hands like gloves and feeling the lusciously soft yarn on your skin add even more empowerment to the knitting experience.

“The best needles and yarns, naturally, vary depending on the piece and person. For me, the circular needle has been a treasure that effectively prevents neck and shoulder ache,” Leena explains.

“When I went to a yarn shop for the first time after the lockdown, I touched just about every single ball of yarn just to feel them,” she says and laughs. “As for needles, I prefer wooden ones.”

Both work on some piece of knitting practically every day. Mervi typically has several pieces in progress at the same time, whereas Leena likes to focus on one or two pieces. 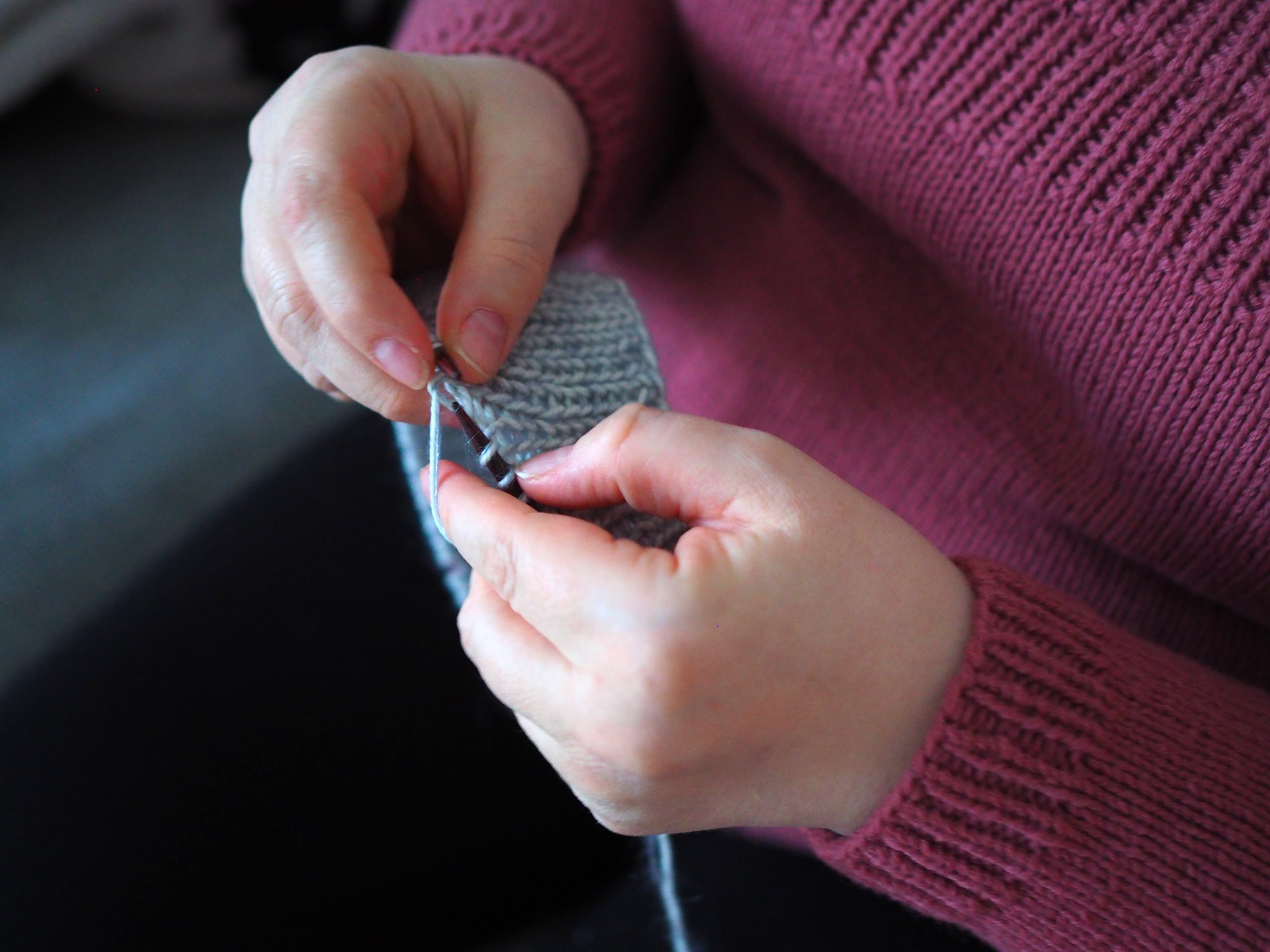 “Leena is the kind of person who can slip in a stich or two in the middle of any activity. I prefer to sit down and focus on my knitting. Slow mornings with a cup of coffee and something to knit are the best thing I know,” Mervi says.

Mervi and Leena also like to knit together or, if not knit, at least talk about knitting, patterns and yarns.

Knitting and other handicrafts bring concrete benefits to everyday well-being. Leena’s day job also involves working with her hands, but knitting is relaxing and it helps her forget about the worries of the day.

“Handicrafts have a soothing effect. Knitting lowers the heart rate. I also find that focusing on knitting helps relieve nervousness. In an ideal situation, I have enough time to sit down, drink coffee and knit. That gives me a wonderful flow feeling,” Leena says. 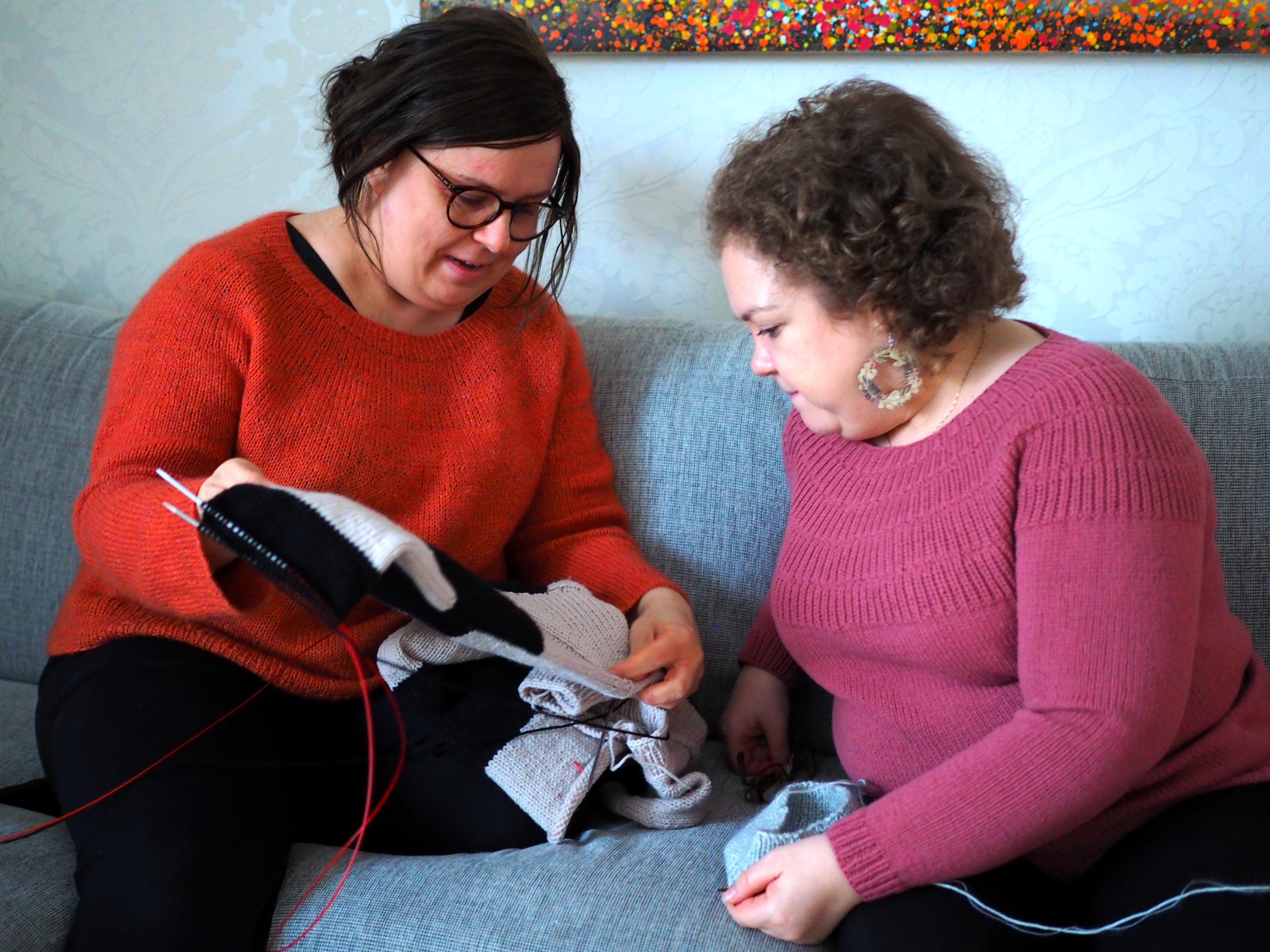 Having hand-made clothes has also increased their appreciation and awareness of the textile industry. Mervi notes that she has started to pay more attention to the origin of the clothes she buys and the actual need to buy them, as well as their care and maintenance.

“Of course, you want to take the best possible care of a piece of clothing you have made yourself, but I have developed a similar attitude towards bought clothes, too. It’s better to only buy what you really need and then take good care of it, instead of making impulse purchases,” she concludes.