This picture is well deserved as the square was designed by Italian architect Vezio Nava, who has worked in Alvar Aalto’s architect’s office.

The architect’s idea for the piazza came alive when Männäisten tori ry, who were developing the Kalanti centre, rolled up their sleeves four years ago.

In the vibrant square, you can have a coffee break with some sweet pastries, enjoy fish soup and live music and buy locally produced food.

In fact, the Männäinen market was how the city of Uusikaupunki was established more than 400 years ago. The market sold wooden vakkas, a type of wooden container, that were exported to Sweden and other parts of Europe. 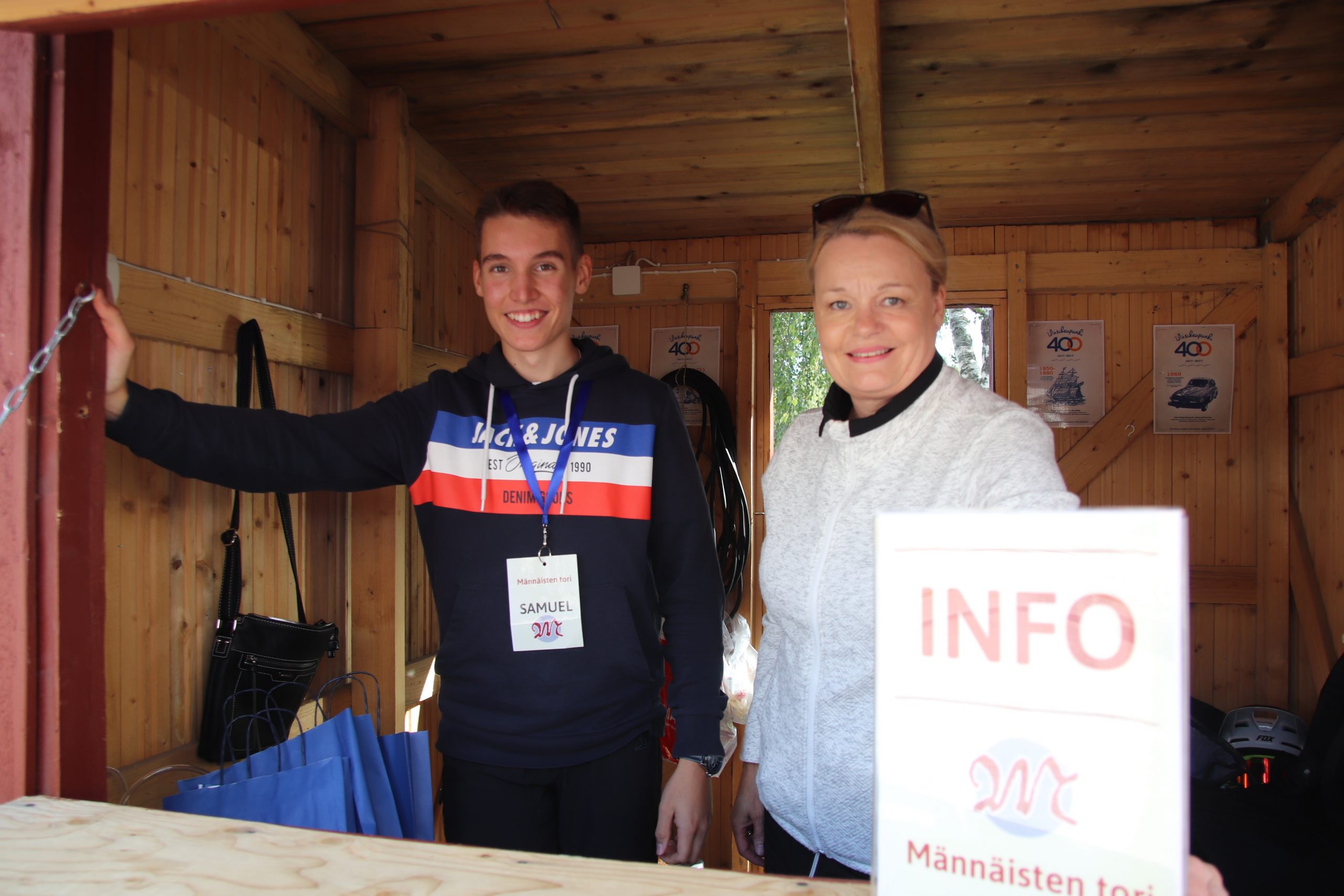 Teija Leino, the vice chair of Männäisten tori ry and the coordinator of the square’s activities, says that the fascinating past of the environment in which she grew up  inspired her to take part in developing the Kalanti centre and, in particular, the square.

Leino, who is an entrepreneur in communications, was impressed when she was informed of the rich history of her home town by Mikko Paana.

Paana, who worked at marketing firm Tekokuu, had learned a lot about the different phases of Vakka-Suomi. He designed the Männäinen square logo and was heavily involved in establishing the square’s activities before his sudden death.

“Mikko’s studies, vision and enthusiasm provide the inspiration for making the spirit of Vakka-Suomi visible again.”

The chair of Männäisten tori ry is Mauri Kontu, the CEO of Kalanti-based Vahterus Oy, which manufactures heat exchangers.

“Mikko, Mauri and I had an idea that the square could be the place that could rejuvenate the town centre. It has been wonderful to see that the square has become a shared livingspace for the people of Kalanti while attracting other operators to take part,” Leino says.

For Teija, the family’s summer house by Lake Taipaleenjärvi is a much-loved place to relax in in Kalanti.

“It’s wonderful to spend time in the place where I grew up and still have good friends.”

She says she always enjoys seeing Jussi Lammela, a musician known from the bands Finlanders and JALO and his spouse Jonna, who have a summer house on the other side of the lake. Jussi and his band have played in Männäinen square this summer.

A lot of families with children have moved to Kalanti recently. The square has activities particularly designed for children. A children’s square event was arranged in August, with the Sähköankerias band headlining the event. 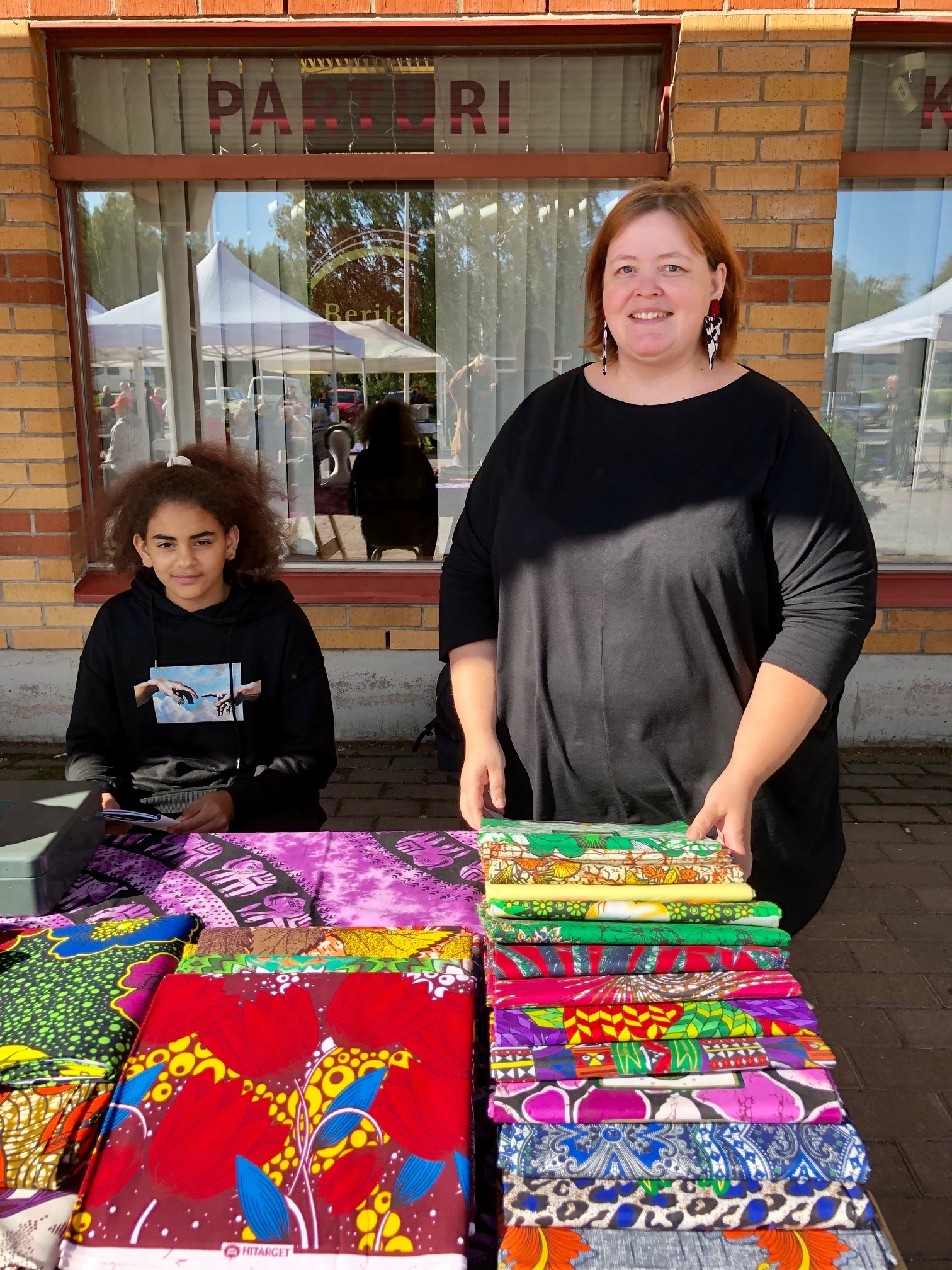 Eeva Adigwe, who sells Nigerian cloths in the square, and her family moved to Uusikaupunki from Salo. The family has seven children, and the eldest child lives in Turku.

The family used to live in the Ketunkallio neighbourhood before finding a place they liked in the Kalanti town centre.

“My husband got a job at the car factory,” says Eeva with a laugh, suggesting her explanation is the same motivation that has attracted many others to move there. The biggest factory in Finland is a major factor attracting people to the sub-region.

Eeva also got a job in Uusikaupunki, but she has spent recent years looking after their children. Now, as their youngest child is one year old, she has started a new job as a customer service representative at Vakka-Suomen Puhelin.

She thinks Kalanti is a safe community. As a mother, she believes the most important thing is the well-being of her children in their living environment. 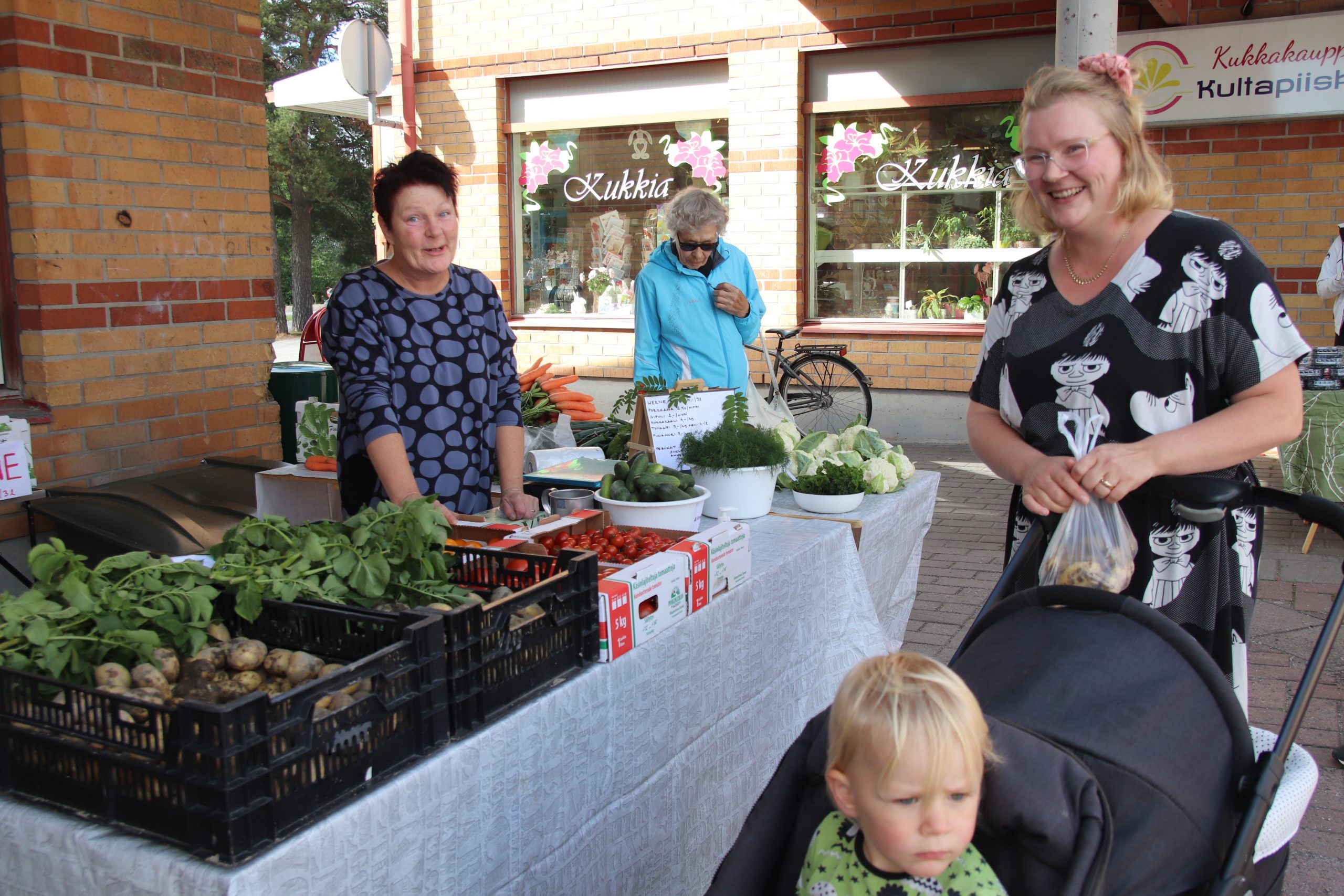 Anna Soini, who popped by the square to buy some potatoes, moved with her family to Kalanti from Taivassalo a year and a half ago. She says that Kalanti is a wonderful place for families with children.

Everything is nearby and a home in a rural environment is peaceful for the children.

A regular at the square, Marjo Mäkinen, who always serves her customers with a smile, has lived in Kalanti all her life and has never planned moving away.

When Marjo is asked to describe her home town, she immediately forms a heart with her hands. Marjo has strong feelings about her home town.

“This is a wonderful little community with lots of activities with everything close by.”

Marjo knows the customers and the customers know her. The service is great. On one occasion, one of her regular customers called her to say they couldn’t make it to the square on Friday.

“I took their peas to their home,” Marjo says with a laugh and adds that such small favours between the people of the town and helping each other out are regular practices for the people of Kalanti. 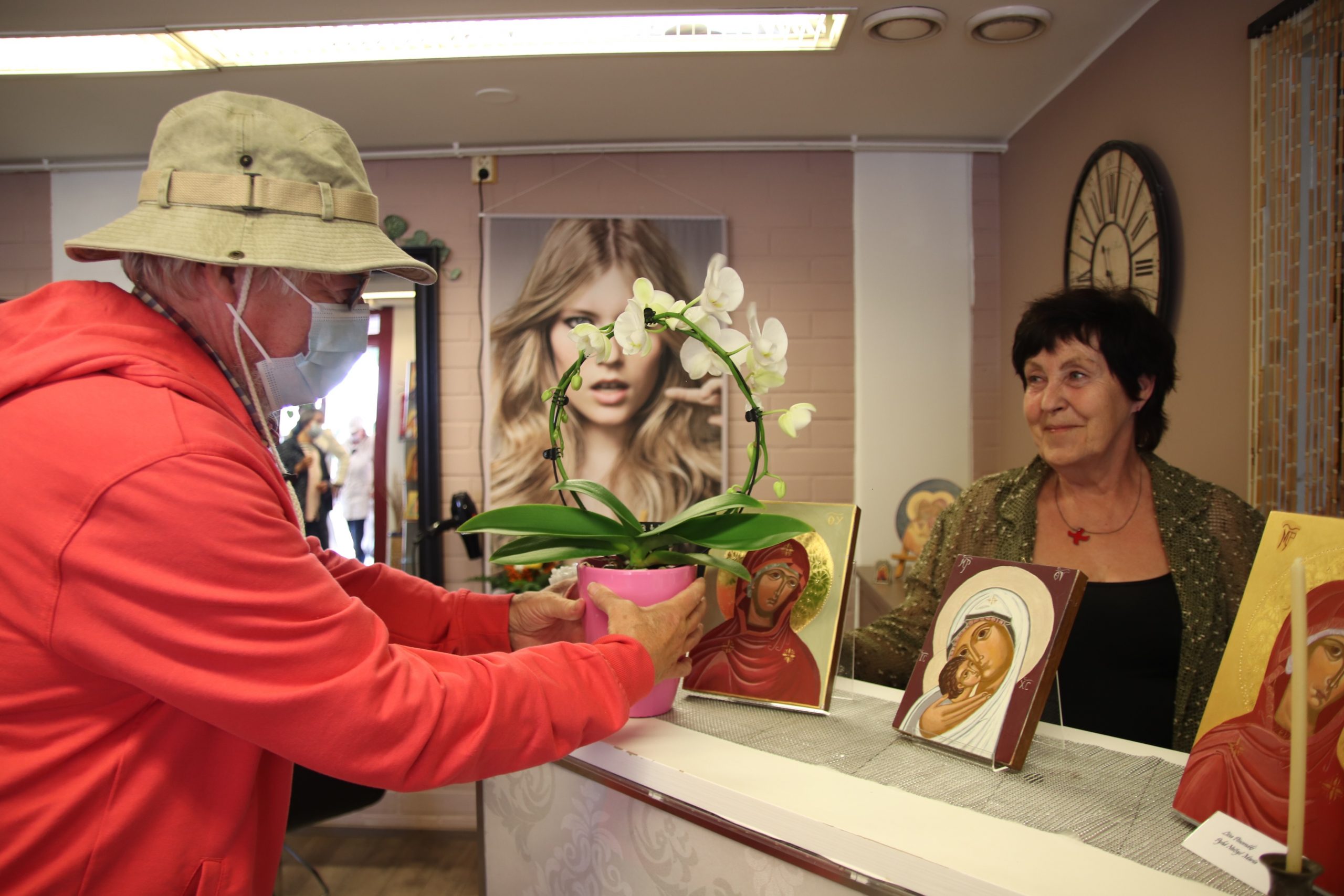 Liisa Pinomäki-Aarras, who runs a barbershop next to the square, has served the people of Kalanti for 25 years in the same location. She moved to Uusikaupunki from Tampere in 1975, and it was love at first sight.

“I first fell in love with the view of the Uusikaupunki archipelago and the twisted pines on Lepäistentie, which were impressive to me as I had lived all my life inland.”

Liisa found a home in Kalanti and she has enjoyed her job, but her true passion is painting icons. In August, she arranged an icon exhibition in her workplace on a market day.

Visiting the barbershop next to the sunny square gave visitors a spectacular and calming art experience.

“This was also my farewell as I’m retiring in September,” she says with a hint of longing.

She is eager to start a new phase in her life, but she says she will miss the deep discussions with the people of Kalanti she has had over the years. 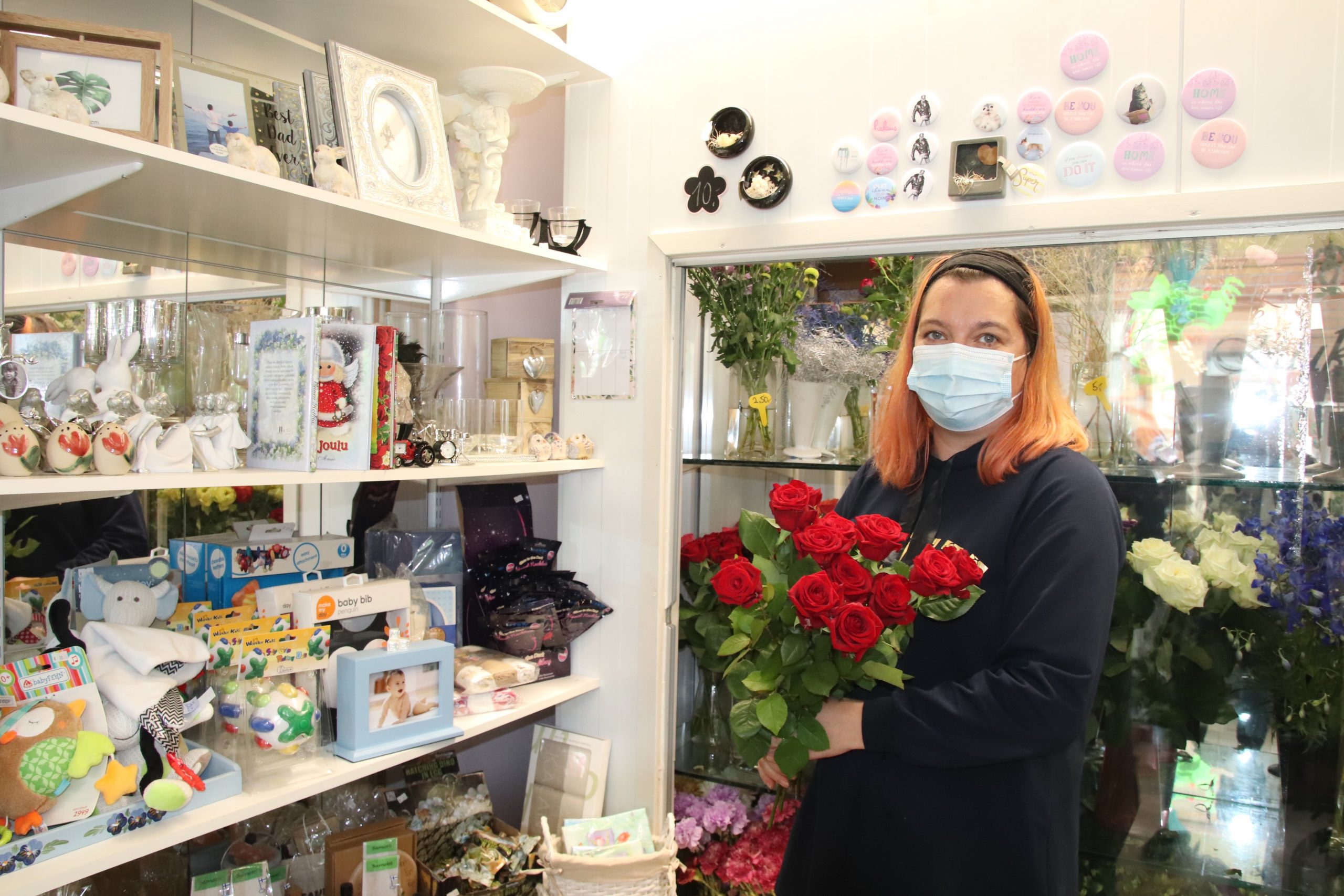 Anniina Kukkula, who runs the flower shop Kultapiisku at the edge of the square, moved with her husband Jan Kukkula to Kalanti from the neighbouring town of Laitila.

“We found a house we liked and we have lived here for 17 years already. The centres of Laitila and Uusikaupunki are just 12 kilometres away.”

Anniina has noticed that, in recent years, Kalanti has become increasingly international. In addition to the car factory, jobs in agriculture attract people from elsewhere. Knowledge of Finnish and the Kalanti dialect is no longer enough in customer service.

“It really improves my language skills as I get to talk English almost every day,” she says.

Anniina is a mother of four and, in her free time, she leads Kalanti-seura, the local heritage association, and takes her children to events arranged by the local sports club, Kalannin Vankka.

“The people of Kalanti-seura are magnificent and very cooperative. This year, we are again arranging the traditional Männäinen Christmas market, and we are also planning a church concert,” she says.