“It was an accident,” says an 18-year-old Aada Puukki.

By an accident, she refers to winning in the youth category of an open writing competition organised by Helsinki City Library. Addressing the theme of Hope, over 300 writers of different ages participated in the competition. The longest poem Sky so bright received praise from the panel of judges for its language and excellent metaphors.

Contrary to what one might think, Puukki has not previously shared her writings with others to read, although she has written hundreds. One of the incentives of participating in the competition was to get her writing out there.

“I’ve wanted someone to read my poems, but I haven’t really wanted to show them to anybody. When I saw there was a competition, I thought it was an easy enough way for me. I would send my poem by e-mail and somebody would read it. If, or when, the poem didn’t place, I could just forget about it, knowing that someone had at least read my thoughts,” Puukki explains.

When she heard she had won, Puukki could not believe it.

“The poem came out of the darkest moments of remote learning, and it gave me hope. It won, so I guess somebody else saw something in it. I would have never believed this could happen,” she says, still amazed at her success.

Puukki has always embraced writing, music and fine art. Ever since she was little, she has sung, played instruments and composed, gone to art schools and dreamed of writing her own book. Currently, she is working on a fantasy story that she hopes to one day publish.

“I’ve been working on the book for several years now. I want to make it as unique as possible—not so much a traditional young adult book but something more serious,” says Puukki.

She thinks Uusikaupunki is an encouraging environment for a creative child. She received support at home to have creative hobbies, and the city offers diverse possibilities, particularly in music.

“I’ve always had quite specific interests, so when it comes to composing, for example, I have networked mainly online with those who are interested. However, for a small city, there are lots of opportunities. I was accepted to the music class from first grade onwards, and I got into an art school when I was very young.”

In particular, Sirke Ruikkala, a piano teacher at the Vakka-Suomi Music Institute, encouraged her to compose.

“Sirke opened up many opportunities for me. For example, when I was 16, she staged my musical fairy tale, Liisa and Alisa. That was the first big project and also part of my final project at the institute. Sirke has been an important source of support in all things related to composing,” Puukki says.

Puukki, who will start her final year at the of Uusikaupunki general upper secondary school in the autumn, will apply to study composition after graduation. If she doesn’t make it into the Sibelius Academy on her first attempt, she could study composition as a minor subject at the Turku conservatory or move abroad. 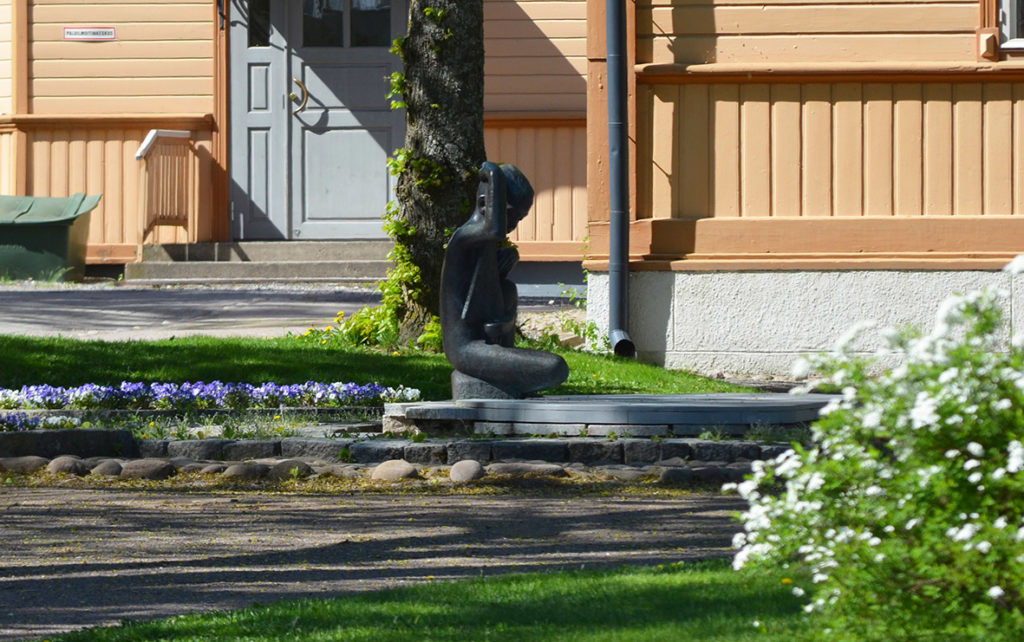 “Film and game music is my thing. You can combine different styles of music and make unique compositions for them. You can really evoke feelings.”

In the future, Puukki hopes to combine the art forms she loves – writing and music.

“I’ve thought about composing a soundtrack to my book,” she says.

After her final year, she’s thinking about heading out into the world. In addition to education, Puukki wants to add to her work experience and network, without forgetting her hometown even when she’s far away.

“Studies will of course take time, and I’m sure I’ll spend years working somewhere else. But, when my life settles down, I could easily return home to Uusikaupunki.”

When the midnight waves are cold
the sea above us awakens.
It’s full of life, moving,
the fractures in the black void gather
and are cast away forever,
or for now.

A million lilies bloom in those valleys,
a thousand fireflies with wings so fragile
and a hundred fairies gather to light them
yet none can ease our agony.
Even the wind brings ten lanterns
and hangs them from the ceiling
when one quiet wish escapes our lips,
as it carries us
upwards, where there is no wind at all.

And the sky is so bright
above the stars.
Underneath it lies
a sea of dark lazurite
waiting to gain a new prisoner,
waiting to chain a new wanderer.

Will it be you, or will it be me?
Who wills it, too wields it.
That who taints the glow,
they must fight the Elder-
and emerge, victorious!
When we gain knowledge and are born wiser,
we seem one step closer to the ultimate truth:

That the sky is brighter above the stars.
We know, we went there
once with my mother for yours was sick.
We took the lights away for a moment
just to see if that would aid us
or destroy us
…but neither happened.

Drop one down, drop one dead
take one down, take one thread
weave them together, weave one feather
make your wings stronger so you can fly with us
To the sky, which is brighter above the stars.

Grow those wings before your mind can pluck them,
before the clouds reach the infinite blue,
you must tend to them
so you can fly with us towards the moon
and we shall promise to meet for the last time
at the sky,
which is brighter
above the stars.